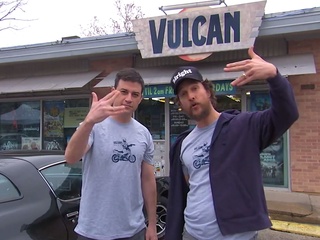 Monday marked the beginning of Jimmy Kimmel's week-long broadcast from Austin. The talk show host has gushed about his love for Austin a lot lately, and during Monday's episode he kept his promise to "boost the local economy."

"Everyone was so warm and welcoming last year, and we wanted to do something to give back," Kimmel said. "There are many big companies here, all trying to get attention. I decided to focus this year on a little one."

In January, Kimmel tweeted out a call for submissions from small businesses on the premise that he and famed Austinite Matthew McConaughey would produce a commercial for one lucky company. Out of the thousands of responses, Kimmel picked the place he felt needed the most recognition.

Kimmel and crew headed to Vulcan Video, local purveyor of new movies, cult films and VHS. "I think we have to show people what's special about this video store, other than the fact that it still exists," Kimmel told Vulcan's proprietors.

Watch them all in the clip above.