The South Austin Social Club puts the “social” back in networking

The South Austin Social Club puts the “social” back in networking 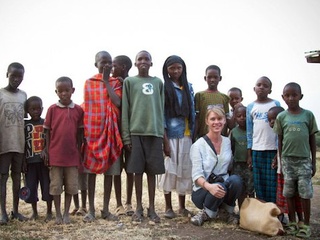 Artist and Photographer, Sheila Fox with Masai Children in Kenya.

Does anyone remember the original definition of "social networking"? As the arts take a blow from virtual relationships and tumbling financial support, the idea of face-to-face time seems like it's worth revisiting. The South Austin Social Club is willing to go retro and build a social network that cares more about face-time than Facebook.

Years ago, a local singer/songwriter named Ken Schaffer started a little songwriter showcase called “Safety in Numbers.” The idea was to crossbreed fans, and therefore, advance the non-existent standing of many of us in the Austin music scene. Oddly, it sort of worked. I made friends and fans, and I learned that a genuine relationship goes much further than the tiresome posturing that artists often have to rely on.

The visual arts of EAST, the education component of Tapestry, Umlauf or TAP and the endless stream of invitations to musical benefits in Austin need a connection to each other. Art is social by nature. It was never meant to be created in a vacuum. As patrons hold onto their donations, and the clubs and venues sit empty, a tweak from social to socialistic could give the fans and patrons a reason to get passionate. The focus would be on artists who make a difference in our community. The South Austin Social Club added the community funding component and viola! We had a real Austin “scene.”

Austin singer/songwriter, Jean Synodinos, has this to say, “It's like a community-based safety net, and supporting artists and projects through SASC is part of my volunteer work in this world, just to make sure that the important work of good people don't slip through the cracks, never seeing the light of day. Plus, it's just a crazy fun idea!”

Don't hate us because we're a bar

A scene needs a space, and the guys at Crow Bar at 3116 South Congress offered some up for the monthly meet-up of The South Austin Social Club. Just when the neighborhood association let out another sigh of exasperation for the presence of yet another bar, Mike Densley and Steve Gee showed up at a meeting to announce they were, indeed, the host of a monthly meet-up for socially active artists. Even the old people “oooh'd and aaah'd.”

On December 27, 2011, the band loaded in, sat the donation hat on the table, and kicked off the coolest place to hang south of Oltorf. Because Crow Bar respects their neighbors, the tunes are acoustic, but the art population is diverse. Painters, sculptors, dancers, actors, writers, photographers and musicians packed that little bar. Add in a healthy dose of locals and The South Austin Social Club was born.

Are you a bully?

At each meet-up, the members pass the hat to raise a little cash for a local artist who is working on a community project.

Sheila Fox from the Umlauf Sculpture Gardens got the first offering. She's a local painter and photographer who works as the Director of Education at Umlauf. All it took was a spin on anti-bullying that included teaching self-expression to help kids learn how to better relate to each other, and the hat was full.

She goes on to say that she focuses on three main goals: teaching self-reflection through the artistic process, creating an atmosphere that also allows for discovery and learning about others, while encouraging the contemplation of how individuals come together and relate in communities.

The January meet-up followed suit with another pass of the hat for Theatre Action Project's Anti-Bullying Campaign.

In February, dancing gets the dole as the club raises some cash for Meg Brooker's Isadora Duncan dance students at McCallum High School. Brooker helped hatch this idea of a multi-arts social network when she asked me to provide sound for the Silk Road Project that featured dancers along the Lance Armstrong Parkway. It seemed ridiculously obvious that we needed each other. Musicians need artists and photographers, dancers need musicians, actors need writers — and so it goes.

Brooker states, “Isadora Duncan, whose work I perform and teach, claimed composers, poets and visual artists as her teachers. She was an interdisciplinary artist, and interdisciplinarity is the creative model I teach my students.”

When a creative type attends a meet-up, he or she tosses a business card into a jar, and that information goes into the network's database.

“The historic relationship between dance and music, dance and theatre is obvious, and with rapid developments in digital media, the collaborative, interactive potential
between dance and other art forms is like a new frontier,” Brooker concludes.

What do you mean I have to play for free?

The South Austin Social Club isn't about making money, so the musicians who play the meet-ups do it for the most common pay in Austin — free. The difference is that the club shares resources that help reduce the cost of the artistic mission. Once a month, the arts support the arts.

For the patron or fan that likes the idea of hanging out with creative types, Crow Bar is the place to be on the fourth Tuesday of each month. The music begins at 7 p.m. A musical guest ends the night, the hat goes around the room several times, and the flesh and blood network between the arts in Austin gets cozy South Austin Style.

Artist and Photographer, Sheila Fox with Masai Children in Kenya.