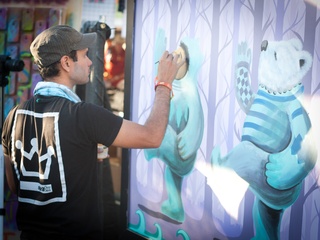 Austin artist Lucas Aoki is just one of the many local creatives who make up more than 11 percent of the total workforce. Photo by Shelley Neuman

The Texas Cultural Trust has released its 2015 State of the Arts report, which shows the impact that the arts have on the state. In addition to economic contributions (i.e., jobs and sales tax revenue generated) and travel and tourism dollars collected, for the first time the report also includes new data that demonstrate the powerful impact that arts education can have on student outcomes such as pass rates, test scores and attendance.

The Texas Cultural Trust also reports Austin, in keeping with our image as Texas’ cultural epicenter, had the largest percentage (11.5) of employees in the creative sector compared to the total workforce. Dallas had the second-highest population of workers in the creative sector, with 184,880 individuals employed in fields ranging from computer and mathematical to architecture and engineering to the arts and entertainment.

The report also found that tourists who enjoyed some sort of art or culture during their trip — one in seven visitors — stayed longer, spent more money and brought more people in their parties. Three of the top 12 activities for non-resident visitors are arts (museums), culture (concerts, theater or dance), and festival-related activities.

“The arts are integral to preserving our rich, vibrant Texas culture; they increasingly play a vital role in our economy, and, now, we can show they also contribute to student success,” Texas Cultural Trust executive director Jennifer Ransom Rice said in a statement. “Our data show students engaged in arts education have lower dropout rates, greater graduation rates and greater rates of enrollment in higher education. Investing in the arts is a clear investment in Texas future.”

Established in 1995, the Texas Cultural Trust promotes and highlights the importance of the arts in educating our children and sustaining our vibrant Texas economy. In addition to the biennial Texas Medal of Arts Awards, other programs include Texas Women for the Arts, Founders for the Arts, Adventures in the ARTS, Young Masters scholarship program, Art of Economic Development and an Art & Digital Literacy Curriculum.