Let's Get Ready to Rummmmble
The return of CLAWstin: The ladies' arm wrestling collective rallies for Round 2, benefitting Upside of Down

165 MPH Winds
Dallas tornadoes a destructive miracle, with 13 twisters but zero deaths in their wake
LATEST NEWS
Spelling the Dream gives spotlight to Indian American champions
moving on up 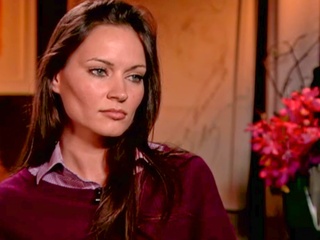 Sarah Tressler was in Dallas to work on the tornado story for Good Morning America. Photo by Will Gordon/Twitter

We knew that with those come hither good looks, smarts and writing talent that Sarah Tressler wouldn't be out on the street for long. The former Houston Chronicle reporter, canned for dancing in men's clubs at night, has been picked up by ABC and is doing contract work for Good Morning America.

You might recall that Tressler was interviewed on GMA last week, discussing her stripper outing by The Houston Press and her subsequent firing as society writer for the Chronicle.

We heard rumors about the Good Morning America gig earlier today. We tracked it down and can confirm that Tressler has been in Dallas working on the tornado coverage for GMA.

A friend, who has been in contact with Tressler, says that this contract work could possibly lead to a more permanent position with the network. But that shoe has yet to drop.