This Old House
These Walls Can Talk: East Austin home is the melting pot of black culinary history

Drunk dialing Austin to tell her that I love her

Drunk dialing Austin to tell her that I love her 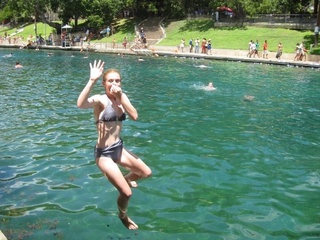 I have a N.Y. driver's license, L.A. mailing address and Austin physical address.

Please don't hold the N.Y. and L.A. parts against me. I roll my eyes just as much as you do when somebody in Austin tells me they moved here from either place.

And if you're a cop, please don't arrest me. I don't want to get rid of my N.Y. driver's license quite yet. I'm 16 in the picture and I'm not ready to let go of my childhood at this time. Even though I look like a bloated Blossom Russo in the picture, 16 was a beautiful time in my life. A time filled of firsts: first kiss, first car, and first set of badly needed tweezers.

I moved to Austin from Los Angeles three years ago for the heck of it. Austin had been popping up on 'best of' lists left and right--"best city to find a job," "best city to date," "best city to relocate to and work on your writing after becoming disillusioned with your career in Los Angeles"--and it seemed like the place for me.

Doing what typically falls around #7 on every parent's list of Top Ten Fears Regarding Their Child, I quit my job, packed what I could in my little Nissan Versa and drove east on I-10 to a city where I knew no one. As I watched the skyline of Los Angeles shrink in my rear-view mirror, I daydreamed about the Six Feet Under-esque journey I was about to embark on with my Wayfarers in hand and Kings of Leon CD in the stereo. Little did I know that though the Wayfarers would be accepted where I was about to end up, Kings of Leon albums were not, and I had to promptly chuck the CD out the window once I arrived.

After the initial anxiety attacks of "What in God's name did I just do?!" subsided, I began to think my move was pretty darn cool of me. Strangers applauded my gumption and pizazz. My pride quickly waned when every Angeleno and their mom started coming to town in droves. A direct zip-line was built between Hollywood and Austin and New York and Austin and all of us shared the same freakin' story. Now I just lie and tell people that I'm from Texas, though most people can tell something is different by the way I say "pants". It sounds more like, "pee-ants." Upstate New Yorkers sound like they have a marble-sized obstruction jammed in their nasal cavities.

When I first stepped foot into Austin, I instantly fell in love. And I lived up near the Domain so that says a lot. If someone's first introduction to Austin is via a luxury mall next to some planned communities and they still love it, that is good news for the city. Luckily at some point I was introduced to the rest of the city and became head over heels enamoured. Mesmerized. Obsessed. Drunk dialing Austin on a nightly basis, screaming "I LOVE YOU! I LOVE YOU SO MUCH! SO SO SO MUCH! YOU MADE ME A WHOLE PERSON AGAIN, AUSTIN!"

Everything about the city just tickled me. Especially the people. Having been deprived of genuine human interaction in Los Angeles for such a long time, I was overwhelmed with the sincerity and generosity of Austinites. My mother was pummeled with frequent phone calls of me sobbing into the receiver, "Mom, I've never seen anything like it. The people here. Oh my God, they ask me how I'm doing! They ask me where I'm from! They ask me my story! Then they walk away without asking for or expecting anything. Why?!" I felt like I was in an episode of The Twilight Zone, praying that I wasn't actually dead from some awesome twist of fate and only dreaming about this idyllic place.

Friends and family instantly saw a change me. They noticed I was smiling in every picture posted on Facebook and when I spoke, there was excitement in my voice. I became Austin's #1 fan. I had drunk the city's proverbial Kool-Aid.

Soon people were calling me to see how they too could have themselves some of that yummy yummy goodness. They asked if a place could really be this wonderful. "Friends," I reported back, "I've found Heaven, and it's called Austin, Texas. Where homeless people can become celebrities, where parrots can live freely, where people feed soup to trees and where music wafts out of every window nightly. It is a city full of pride, love and the best freakin' breakfast tacos your taste buds will ever make love to. Austin is the Promised Land, and I have arrived... Now tell everyone I'm the last person from Los Angeles they let through the gate!"

There is something special about Austin, there is no doubt about it. This city took me in and gave this wounded and battered urbanite a sense of home. I came here not hoping to change Austin, but to let Austin change me--and it did. Austin reinstated my faith in community. That people don't want to see you fail, but succeed, and that they will help you in anyway they can. This ideology is infectious and I only hope that I'm able to give back to Austin how much she has given me.

So why do I still have a LA mailing address and NY driver's license? Beats me.