The Legislative Cocktail Hour
Texas: Where the Constitution protects our guns but not our women 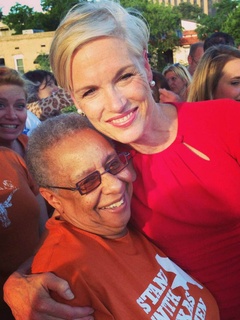 Supporters at the Capitol. KVUE

It’s hard to ignore the droves of women and their supporters clad in orange t-shirts that have descended upon the Texas Capitol over the last five days. What started as a simple phone call between close friends Tanene Allison at the Texas Democratic Party and state Rep. Mary Gonzalez, a Democrat from El Paso, has earned attention and support from legislators, became a worldwide trending Twitter hashtag, garnered national media attention, and morphed into grassroots organizing at its finest.

So fine, in fact, that the leading voice and face of reproductive justice and women’s health in the country, Cecile Richards, landed in Austin Monday to personally thank the hundreds upon hundreds who have dedicated long hours to fighting the Texas Legislature’s latest attempt to impede upon women’s health care and access to safe, legal abortions.

“You’ve been amazing to watch,” she told a crowd at the Rattle Inn Monday evening. Richards, daughter of the late Texas Gov. Ann Richards, is the president of Planned Parenthood Federation of America. “If Mom were here, she’d be right there with us.”

Richards expressed gratitude Monday night while motivating the crowd for what’s ahead on Tuesday. Sen. Wendy Davis, a Democrat from Fort Worth, will likely filibuster (a.k.a. just talk) for more than 12 hours until the midnight deadline rolls around, killing Senate Bill 5, which would ban abortions after 20 weeks and impose such expensive regulations that all but five abortion clinics in the state would shut down.

Whatever your opinion about the legislation, the level of response and mobilization that has taken place over the last five days in Austin can’t be ignored. When the idea for a “people’s filibuster” (which essentially meant as many public citizens as possible would testify against the bill until the clock ran out to pass it out of committee) first came about late last Wednesday, Allison couldn’t have imagined the life it would take on.

More than 500 people showed up Thursday night to testify, some only to be cut off mid-hearing after camping out and waiting for 12 hours. And more than 700 showed up Sunday night to watch the marathon floor debate, not to mention the thousands following online.

“The people of Texas want to be engaged,” Allison said Monday night. “A week ago, none of these people knew this was going to happen. It’s so organic.”

And it’s thanks to not one organization, but a handful of longtime partners and advocates for women's health and choice. Groups like Planned Parenthood, NARAL Pro-Choice Texas, Whole Women's Health, Jane’s Due Process, Annie’s List, The Lilith Fund, The Texas Democratic Party, Capital Area Democratic Women, and the Texas Freedom Network, harnessing the breadth of their supporters as individual groups and capitalizing on the power of social media, worked together to motivate them to turn out against the bill.

Guli Fager, a board member of the Lilith Fund for Reproductive Equity that provides financial assistance to women seeking abortions, spent Thursday night, early morning Friday and Sunday night at the Capitol. “It’s exciting to work in coalition with other groups that care about Texas families,” she said. “There’s a lot of anti-choice legislation out there, and for [Cecile] to come here demonstrates the amazing grassroots success of what’s happened in the last five days.”

Jessica Luther, a “dead tired but totally energized” local reproductive justice activist who has spent every day since Thursday at the Capitol, knows the long hours she and hundreds of other have put in have been worth it.

“Texans have shown up — it’s been a remarkable thing to watch and be a part of,” she said. “It appears to have happened over night, but people have been working on the ground for years preparing for a moment when they could mobilize a whole lot of citizens and constituents.”

This week’s turnout, coupled with the recent momentum of grassroots voter registration groups and the changing Texas demographics, adds to the feeling of impending change in Texas.

“We’ve got a whole lot of work still to do, and we’re going to win in the long run,” Richards said. “This state is changing, and it’s going in the right direction.”