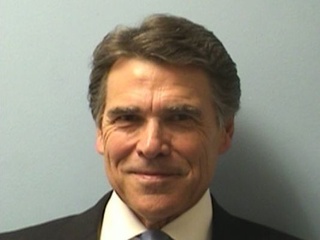 Reports are circulating that Governor Rick Perry will be booked on Tuesday afternoon. As KVUE reports, CNN has confirmed with Perry's lead attorney, Tony Buzbee, that the governor will be at the Travis County Justice Complex on Tuesday around 4:45 pm.

Perry will speak to the press before he heads into the complex to go through the booking process, which includes being fingerprinted and having his mugshot taken. "This is a complete waste of time and money, but he will do everything everyone else would have to do [in this situation]," Buzbee told CNN.

Perry was indicted on two felony counts for abuse of official capacity and coercion of a public servant on Friday, August 15. A grand jury ruled against Perry for his alleged efforts to force Travis County District Attorney Rosemary Lehmberg to resign after she was convicted of DWI in 2013.

Since the indictment, the media — and the public — have been anxiously awaiting the booking process (and the forthcoming mugshot of the Texas governor).

Supporters of Perry will hold a rally outside of the Travis County Courthouse on Tuesday at 5 pm, reports the Texas Tribune. Perry's arraignment is scheduled for Friday, August 22; at that time, charges will be formally levied against him.