Emotional Hardbody Answers
Why can't she quit me? Constant contact won't make you a 'good guy'

Pet of the Week
Help find a home for Brooke, APA!'s captivating and playful bulldog
LATEST NEWS
Your guide to Rainey Street, one of the hippest districts in Austin
In The News 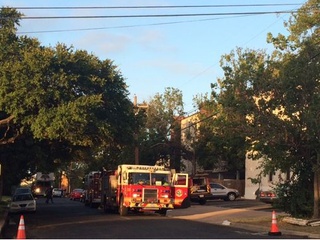 Dozens have been displaced after a campus-area apartment fire.  Courtesy of KVUE

16 apartments were affected.  Courtesy of KVUE

KVUE — University of Texas students were among the dozens of residents displaced by an overnight fire in Central Austin.

It happened in the 3200 block of Helms Street near Speedway. Just before 2:30 am Monday, firefighters received a call about heavy fire coming out of the doors and windows at Walnut Run, a three-story apartment complex. The fire was under control within about 45 minutes.

Three buildings were evacuated, but residents in two of the buildings were able to return. Firefighters said of the 16 apartments affected, two apartments had heavy fire damage and many more have smoke and water damage. The fire department said everyone was evacuated safely and there were no injuries.

Residents who could not go back inside were taking shelter in a Capital Metro bus. One of the residents, a UT student who just moved into the apartment complex on Sunday, said she thought the fire started in the apartment next door.

"I jumped up, not thinking anything. You see this happening all the time in the movies, but when you're actually in it, it's like, 'What do I do?' What do you grab, what do you need, what's a necessity?" said Amber Perez. "It's really overwhelming. I can still feel my heart beating really fast."

Perez and her roommate, Candace McKinney, ran through the halls, banging on doors and waking people up. McKinney's mom and dad were staying the night in her apartment. She said their visit forced her to sleep near a window, and that may have saved her life.

Dozens have been displaced after a campus-area apartment fire.  Courtesy of KVUE