Divorce Boot Camp: Session One
Divorce boot-camp: These boots are made for...
LATEST NEWS
Come Play takes specter of too much screentime to the extreme
signal, signal, signal

In shocking turn of events, Austin ranks near bottom of a "Best" list, deemed worst drivers

In shocking turn of events, Austin ranks near bottom of a "Best" list, deemed worst drivers 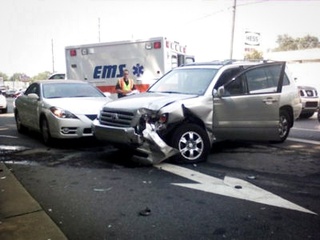 Austin drivers are improving, but they still have a ways to go. I’ve had a few days to think about the latest Allstate America's Best Drivers Report™ and why Austin ranks near the bottom of the 2011 list, at 150 out of 200. The annual list ranks drivers in the country’s 200 largest cities based on the frequency of collisions, based on Allstate claim data.

According to the statistics, Austin drivers on average are involved in crashes every 7.9 years. For comparison's sake, in Fort Collins, Colorado, the city that received top honors in terms of safety, drivers can expect to be involved in a collision every 14 years. In a small silver lining, Austin’s rank on the safest driving cities list rose from 170 to 150 between 2010 and 2011.

I have personally been in Austin for six years now, and there are two things I've noticed that drivers should do in order to make the roads safer (and to just be more polite). The first is making an effort to signal. I cannot tell you how many times I have been cut off by a driver who refuses to signal, or how often I've been left waiting to make a left hand turn, only to have the driver I’m waiting on make a last minute right, sans notification. I went to a fairly inexpensive driving school, but one of the things that was drilled into me was to always signal my intentions. Even when driving at 3 a.m. with no one in sight, and I will still signal before turning into my own driveway. Excessive, perhaps, but good habits are meant to be repeated.

My second observation is that drivers would rather speed up than let you in. This makes me crazy. Near my house, there is an area where drivers merging onto the frontage road are supposed to (by law) yield to exiting Mopac traffic. Do you think they do? Nine times out of ten, the merging car decides it can beat the car exiting the highway and puts it into high gear to move ahead of them. More than once, I've seen this game of cat and mouse nearly end in fire trucks and ambulances. Really, unless you are on your way to the hospital with a dying person in the backseat, there are few reasons a few saved seconds are worth risking an accident.

Mike Roche, Executive Vice President of Allstate's Claim Organization, says the biggest cause of accidents is human behavior. I can only guess this might include not signaling, not yielding, running red lights, texting while driving and a variety of other bad driving habits many Austin drivers are guilty of somewhere along the road. He says the Best Driver’s Report was created in hopes of increasing awareness about safe driving practices.

I hope with more education and improvements to the city’s infrastructure, Austin's numbers will continue to improve. I'm no driving expert, but if this article makes just one person think about signaling more often or letting that truck exiting go ahead, then I have done my part to make Austin a safer place to drive.

Houston and San Antonio drivers also ranked low on the list, coming in at 155 and 142, respectively.