Picture This Pet
Meet Marybell, the cuddle-loving dog looking for her best friend

SXSW by The Numbers
SXSW by the numbers: 87 countries, 13,990 hotel rooms and more
LATEST NEWS
Story of Rebecca is timeless, but its characters need updating
In The News 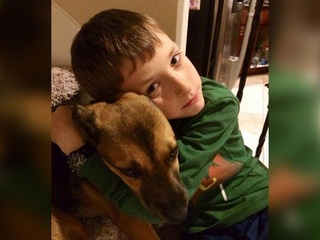 Alex Hermann was struck by lightning on August 26. Courtesy of KVUE

KVUE — On Tuesday afternoon, the Field of Dreams in Bee Cave was filled with children practicing their soccer skills. But there was one child missing: 9-year-old Alex Hermann.

"Their son was a happy-go-lucky kid and then, he's now reduced to, you know, basically in bed, not moving, not communicating," said Mark B. Levin, the attorney for the Hermann family.

On August 26, Alex was struck by lightning. Witnesses said it wasn't raining and the strike seemed to come out of nowhere. A 19-year-old coach ran to Alex and started performing CPR. First responders say that saved the child's life.

To honor that action, a couple, who wishes to remain anonymous, held a fundraiser for the Hermann family Tuesday evening. They decided to donate $10 for every person who took 10 minutes to learn hands-only CPR. The couple pledged to give at least $1,000 to the family.

"Hearing about this event, it allowed us to feel empowered to do something to help us learn, you know how to possibly save a life," said Amy Plummer. The event and the cause hit home for Plummer. Her 7-year-old son, Ethan, plays soccer in the same league as Alex. "It's just beyond a nightmare because it wasn't even something any of us thought really to be concerned about," said Plummer.

A lawsuit filed by Alex's parents claims lightning should have been on the minds of Lake Travis Youth Association (LTYA) staff. The suit alleges the association was negligent and ignored basic safety principles with lightning in the area. It also lists the South Texas Soccer Association, the Field of Dreams in Bee Cave and Capital Area Youth Soccer Association as defendants.

"The industry standard, I believe is they should have a board member on the scene every practice or for every game, whose job it is to monitor the weather and make a call as to whether to pull kids off the field," said Levin.

Alex went into cardiac arrest after being struck. Levin says the child has permanent brain damage due to a lack of oxygen after the strike. He can't talk, hear or move and will need around the clock care for the rest of his life. Alex was flown to Dell Children's Medical Center in Austin after the incident, then transported to Parkland Hospital in Dallas. Levin says his medical bills are already $500,000 for two weeks. The lawsuit asks for $10 million.

"They have a liability insurance policy on the field, I would imagine, so we're not going to be taking money from, you know, if we get a jury verdict in this case, then it won't come out of the association, it will come out of their insurance policy. That's why they bought the insurance. In case they are negligent in a situation like this," said Levin.

Read the full story and see the video on KVUE.com.