Slainte Y'all
The Irish know where they want to party, and it's Austin, of course

Pet of the Week
APA!'s Rusty Sledge is more than just a great name — he's a great dog
LATEST NEWS
Whole Foods rings up top honor in ranking of best employers for grads
In the News 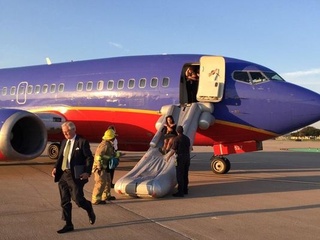 A Dallas-bound Southwest flight returned to ABIA to make an emergency landing. Courtesy of KVUE News

Airline officials said the crew on Southwest Airlines Flight 481 reported an odor in the passenger cabin, and the captain declared an emergency as a precaution.

The plane landed safely at ABIA, but Southwest Airline officials say fire and rescue personnel observed a "hot spot" on the wing of the plane and advised that the plane not pull up to the terminal.