The final countdown: Where to watch election results on the big night

The final countdown: Where to watch election results on the big night 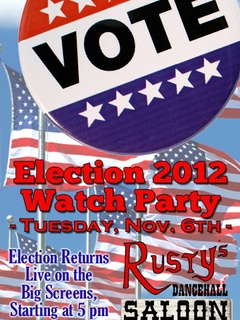 In case you're living under an apolitical rock or bad with dates, Tuesday night is the big reveal for which candidate our country elects to be our next president.

Hopefully, you'll have done your civic duty and cast your votes for the list of candidates running for office this season, and you'll be just as invested in watching the outcomes of the overall elections. With a close race like this one, it really will come down to every vote, and we may not know the winners until the very last state is announced. In the case of recounts, it could be even longer than that!

That's too much anxiety for you to face alone, right? So why not get out and watch the election results with a sizeable sample of your city's population? Grab a drink (or ten), learn more through civic dialog and discussion, and then celebrate (or lament) with your peers.

Here are our picks on the five biggest and best presidential election watching parties:

The Texas Tribune is hosting a fully commentaried National Election Watch Party at the Belmont starting at 6:30 p.m. This regular party is the perfect place for progressives and serious news pundits to get the reads on all the biggest issues and races throughout the country. Once the polls are closed, the dialog and live entertainment begins — up to and after the final decision is announced.

The amazing 25-foot screen and amplified sound are quickly becoming the best place in town to catch the biggest moments in our lives. With a menu of election-themed drink specials, standup comedy during the breaks from Bob Khosravi, Norm Wilkerson and Jake Flores, and a screening of George Carlin's 1978 classic, Again, this is one party you'll be encouraged to get both political and drunk at, regardless of whom you're voting for.

Generational Alliance and Hip Hop Congress are teaming up to bring you another chill non-partisan atmosphere to celebrate the victory of your candidate or drink away the defeat. Knuckle Rumbler is providing the free beer for everyone and Bobby West will providing the DJ tunes all night long.

Matt Bearden hosts his PUNCH! comedy showcases on Tuesday nights, and this week is no different. Of course, Cap City will have a TV on for you to follow along with the results, but you'll also get to hear from the talented lineup of Mac Blake, Kath Barbadoro, Jonathan Pace, Jeremy Neal and David McQuary, who will likely have a few tasty election zingers to spice up your appreciation of this nail-biter night.

President Obama repealed Don't Ask Don't Tell and is the first Chief Executive to go public with his support for marriage equality. With all of the high stakes for GLBTQ groups in the wake of this election, several queer groups will gather Tuesday night at Rusty's on 7th to watch the results unfold. Come hang out in the company of your peers and express your very real feelings, thoughts and concerns before and after the results.

Otherwise, if you're going to be at home, make sure you have someone to share this monumental moment with. Whomever is elected (back) into office is going to have a huge responsibility placed squarely on their shoulders for the next four years. Let's hope we make the right decision.