Pet of The Week
Meet APA!'s Sorullo, the quirky retriever ready for anything 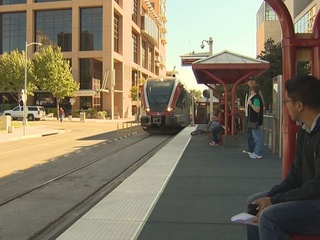 Austin voted "no" on Proposition 1. Courtesy of KVUE.com

KVUE — Austin voters turned down Proposition 1 Tuesday, which would have made a 9.5-mile urban rail route in part of the city at the cost of $1 billion.

The proposed route would have started in southeast Austin at Grove Boulevard and East Riverside Drive and traveled through the city to end in North Austin at the Austin Community College Highland Campus.

Citizens Against Rail Taxes focused on how the proposition — which asked for $1 billion for the route and road improvements — would increase property taxes.

"Number one, this train has no impact on congestion and that's the major point being pushed by the city," said CART treasurer Jim Skaggs. "Number two, it's a huge tax increase which is going to burden people mightily."

While CART members are against the rail, they know there is work to be done to fix Austin's traffic problem. Many will go back to work Wednesday looking for new solutions.

Supporters of urban rail, including outgoing Mayor Lee Leffingwell, said the results came as no surprise.

Polling suggested voters had a hard time paying so much money for a relatively short line. Mayor Leffingwell says without the rail and money promised for new roads, Austin's traffic problem is going to get even more painful.