Sentimental Value
How much is a beloved pet worth? A heartbreaking unauthorized euthanization could change Texas law for dogs 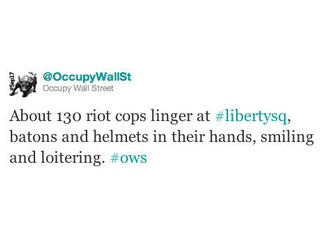 Early this morning, hundreds of Occupy Wall Street protestors were forcibly removed from New York City’s Zuccotti Park. Around 2 a.m., a flood of eyewitness stories painted a surreal picture of police in riot gear descending on the makeshift tents and camps that have been established over the past few months; allegations of violent arrests and injuries punctuated reports that all personal belongings—tents, blankets, kitchen supplies, a medical tent and even the 5,000-volume “People’s Library” that OWS supporters have been carefully curating—were tossed into waiting dump trucks.

While hundreds of protestors, forced out of the park in hordes, broke into groups and began marching uptown, trailed by police vans and spotlighted by a series of helicopters hovering above, network news stations in New York were surprisingly silent. Even at 4:30 a.m., hours after force was reported at Zuccotti, there was no coverage of the unfolding events. Yet detailed accounts continued to emerge, calls for support began to draw a crowd and stories of specific incidents (including the injury and arrest of city council member Ydanis Rodriguez) began to spread like wildfire.

If OWS is the voice of the people, Twitter has truly become their megaphone—the scattered handful of journalists and protestors sending 140-character updates from the scene were, for hours, the rest of the world’s only way of following this incident. And follow they did, with live streams of on-the-ground coverage attracting thousands of rapt viewers from around the globe.

As the Zuccotti camp was being broken down, reporters at the scene were forcefully ejected from park grounds, allegedly told they weren’t allowed to witness the unfolding events. (Additionally, police helicopters blocked the air above the park and protestors, preventing news choppers from getting a birds-eye view.) Undeterred, many journalists refused to leave the area, either making their way back into Zuccotti or darting back and forth between the splintered groups marching uptown (one contingent progressed all the way to Broadway and Houston, roughly two miles from OWS, before turning back). The dazed protestors eventually regrouped at nearby Foley Square, where they quickly organized a General Assembly meeting—and started a new Twitter account, @OccupyFoleySq, to provide updates and send out calls for support.

Near daybreak, network news vans began showing up at the scene, broadcasting surreal images of police flanking and surrounding the growing group of protestors at Foley Square. Unsurprisingly, much of the coverage failed to address the violence that witnesses had been reporting on for hours; Twitter remained the most reliable and trustworthy source for to-the-minute updates.

A few of the journalists contributing coverage throughout the night included:

What’s next for OWS? Some seem to think this incident will only bolster the movement; recently, there had been reports of rifts among protestors due to disagreements over ideology. This morning’s events were certainly a strong uniting force, attracting scores of new supporters outraged at the alleged brutal and unfair treatment of the peaceful campers in addition to refocusing everyone’s priorities to the preservation of their right to assemble.

One thing’s for sure: Twitter has emerged as the only real source for constant, consistent updates on the OWS movement and the way it’s being handled by authorities. While it’s no surprise that new media is such a huge and helpful tool for grassroots activists, seeing this in action (and, notably, here in the US, after Twitter played such a huge role in recent uprisings in Egypt and Iran) is striking. Older generations who remember the turmoil of the late 60s are perhaps reminded of past events, while younger observers—those who haven’t seen this kind of organized movement in their own country, and who likely thought they never would—have a unique chance to follow the news so closely it’s as if they were there in the Tweeting crowd themselves.

As of early afternoon Tuesday, protestors have re-assembled at Zuccotti Park and their numbers are starting to swell, with reports of arrests continuing.