Shutting It Down
No new downtown events until construction stops, city official says
LATEST NEWS
Here are the top 5 things to do in Austin this weekend
Mike Brown Remembered

Hundreds rally at APD headquarters in support of Ferguson 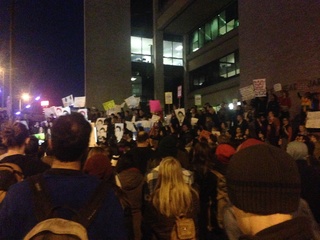 Hundreds rally outside of APD headquarters. Photo by Katie Friel

KVUE — Holding posters with the face of Michael Brown, a crowd of hundreds stood in solidarity on the plaza at the Austin Police Department headquarters Tuesday. The crowd was so large it spilled into Eighth Street as participants peacefully spread their message.

"Black lives matter," they chanted. For more than four minutes, the crowd was silent to represent the more than four hours Michael Brown's body lay in the street as police investigated his death.

Jim Harrington, director of the Texas Civil Rights Project, said, "The problem is that the police have such a latitude in the use of force policies and I think that this national effort that's going on to tighten that is what this demonstration's about."

"We, like I think hundreds of thousands of people all across the country, were really troubled by what happened in Ferguson, Missouri last night," said Snehal Shingavi, organizer of The People's Task Force. "Every city in America has a Mike Brown. Every city in America has an unarmed person of color that has been shot by a cop and justice has not been delivered to them."

For Austin, the crowd said it's Larry Jackson. Jackson, a black man, was unarmed when he was shot and killed by an Austin police officer. That officer, Detective Charles Kleinert, has since retired. He was indicted and is awaiting trial.

"The issues in Ferguson, Missouri speak directly to the issues that are going on here in Austin, Texas," Shingavi said.

"People in this country who think that we don't have a race problem and that we're over it need to wake up," said Stephanie Perry, who attended the rally. "All these lives have been lost and we repeat history over and over again."

Many said it's frightening. "It hits home because I have two sons. Every time they go out, you're always afraid that if they ever get into a situation — even just pulled over for a traffic ticket — they may not come home," said Sue Spears, who was at the rally.

People in the crowd said they want a change in use of force policies, restorative justice and improved relations with Austin police. "It's really not about all the chaos that ensued after the verdict, but it's what we need to do to address systems that lead to verdict," said Austin activist Saul Paul.

To read the full story and to see the video, head to KVUE.