The Beatles were wrong: Love isn't all you need

The Beatles were wrong: Love isn't all you need

By Christina Pesoli
Dec 2, 2011, 4:30 pm
Says Travel+Leisure: "Javier's is not necessarily a critic's darling, yet it's the go-to choice for locals when they’re tired of the flashy scene at nearby Mi Cocina." Photo courtesy of Javier's 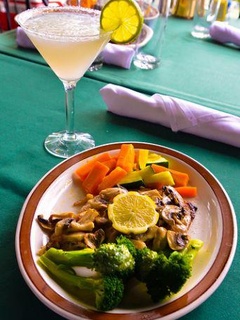 Javier's in Dallas made Travel+Leisure's list of Best Mexican Restaurants in U.S. Photo courtesy of Javier's

Christmas is the time of year for making lists. Who’s naughty. Who’s nice. And, of course, what to get the lucky folks who are on the latter of those two lists. But Hannah and I had a conversation the other day that got me to thinking about another kind of list altogether. It’s the list of qualities that matter when you’re choosing a significant other. And as it turns out, Avril Lavigne was a lot closer to being right than the Beatles.

Love isn’t all you need, after all. Like most things that have to do with relationships, it’s complicated. And that even applies to the setup for this story…so bear with me here for a second while I give you a little background.

A total of four people consider my house their permanent address, and almost a full three of them are lawyers. My boyfriend Clint and me, plus my son Aaron who will graduate from law school in May. In light of that fact, it’s probably not surprising that there is always one debate or another raging at our house. And while pleading one’s case is an everyday occurrence around here, some arguments are a bigger deal than others.

So when Clint got the opportunity to argue a case before the court of appeals in Dallas, we were all very excited. In keeping with that argumentative spirit, Hannah lobbied that because she also wants to be a lawyer someday, she should be able to go watch Clint even though that would mean missing school. After having a side bar with Clint to make sure he didn’t have any objections and being convinced beyond a reasonable doubt that he really wanted us to be there, I ruled in her favor.

The day before Clint’s argument I picked up Hannah from school and the two of us drove to Dallas to meet him. Along the way, I reminded Hannah that although Clint typically puts everyone else’s concerns before his own, we had to remember that this trip was all about him. I explained that this was a very important milestone for him and he might be nervous. Our goal was to do whatever we could to minimize the stress he was under rather than add to it. From where we ate dinner to whether he needed quiet in the hotel room while he prepared, we were going to do whatever we could to avoid making waves.

When we arrived in Dallas, we picked Clint up from the hotel and went straight to eat at a nice restaurant that Clint had chosen. Clint seemed relaxed and happy to have us there. Hannah was in great spirits, declaring a couple of times that the restaurant was her “new favorite restaurant in Dallas.” As dinner wound down we paid the check and were getting ready to leave when Hannah unexpectedly leaned forward and… threw up all over the floor. Twice.

I was stunned, but Clint sprang into action, grabbed some napkins (cloth, of course, since it was that kind of restaurant) and covered up the mess. He told me to take Hannah to the bathroom to help her clean up while he handled the situation out there. He didn’t have to ask me twice. I knew I was getting off easy. After a while Hannah and I made a break for the car and Clint joined us. I mentioned that I wanted to run back inside and leave an extra tip for our waiter who I had spotted wearing rubber gloves and hovering over the mess as we ran through the dining room on the way out the door. But Clint told me he had already taken care of that, too.

As we drove back to the hotel I worried about everything that could go wrong over the twelve hours that separated that moment from game time for Clint. What if Hannah was coming down with a stomach bug and was going to be awake all night throwing up? We were all in the same hotel room, which meant Clint wouldn’t be able to get any sleep, either. What if Clint now caught the bug from Hannah, since he was on the front lines of the mess at the restaurant? I apologized to Clint for the whole situation and offered to get another hotel room for Hannah and me. He said there was nothing to apologize for. His only concern was for Hannah, and he insisted that our getting another room was a ridiculous idea.

Luckily, Hannah slept through the night and woke up the next morning feeling fine. In a welcome contrast to the evening before, Clint’s argument went smoothly and the only surprise was a pleasant one. After the arguments were over, the presiding justice asked Hannah if she wanted to be a lawyer someday; when she answered in the affirmative, he invited her to join Clint at counsel’s table since “that’s where lawyers belong.”

As we drove home to Austin, Hannah and I chatted about the preceding twenty-four hours.

“The thing about Clint is he’s always nice,” I said. “Even if things are going wrong or he’s stressed out or people are inconveniencing him, he’s never a jerk,” I said.

Hannah was quiet for a little while, then she offered her rebuttal, “Or like Aaron. Because Aaron is nice and he likes Vineyard Vines.”

Out of the mouths of babes. When discussion turns to the topic of choosing a mate, you’ll often hear fully grown adults say that love is all that matters. Even my 10-year-old daughter understands there's more to it than that. That type of oversimplified thinking is as short-sighted as Herman Cain’s 9-9-9 plan; and selecting a mate based on love alone will likely result in a relationship as fraught with problems as Herman Cain’s presidential bid.

When it comes to the list of characteristics that a person should consider, there’s a subset of qualities that are universal—things that should come preprinted on the potential partner checklist, so to speak. Items like being honest, trustworthy, responsible and — my personal favorite — nice. But the rest of the qualities have to be custom-tailored to the person who is making the list. In other words, the checklist is a two-part form. Love matters, to be sure. But it’s really the heading on the template. If you stop there without putting pencil to paper and completing the entire checklist—both the preprinted and the custom-tailored portions, you haven’t even started your homework, let alone finished it.

In my case, the top items on the custom-tailored portion of my checklist would include intelligence, shared sense of humor, acceptance of my long-standing feelings for Stephen Colbert, similar political views and a penchant for verbal sparring. But the custom portion of Hannah’s list will most certainly be different. And if she were making that list today, it would probably include a fondness for cats, a love of reading, a deep appreciation of ballet, a passion for preppy fashion and also a penchant for verbal sparring. The person who meets both the preprinted requirements as well my custom-tailored criteria would likely be all wrong for Hannah, and vice versa—even though both of those candidates would hopefully be honest, trustworthy, responsible, and nice.

Not only will the items on each person’s individual list vary, their ranking of importance will as well. A person may love to travel and initially have that on his list, but if he finds someone who has 90 percent of the other items on his list, he might decide that travel is something that he can let go. Then again, if he is a travel writer and has extended family that lives overseas, that item might be non-negotiable.

So, take it from Hannah, the most junior member of the bar: Love may be blind, but you’re not. Use all of your senses—especially your common sense—when you’re assessing whether a particular person will make a good partner for you for the long haul. And whether it's the holiday season or not, when it comes to picking a partner, be sure to make your list and check it twice. And once you’ve determined whether your candidate is naughty or nice, keep going to the custom portion of the analysis.

The process might be complicated, but it’s worth doing. Because even if you appreciate verbal sparring, you want a relationship where you can enjoy silent nights, where all is calm and there's not always fight.

Says Travel+Leisure: "Javier's is not necessarily a critic's darling, yet it's the go-to choice for locals when they’re tired of the flashy scene at nearby Mi Cocina." Photo courtesy of Javier's