By Nicole Raney
Dec 9, 2014, 3:55 pm
The West Campus area has experienced a spike in home and auto burglaries.  Courtesy of Austin Police Department/Facebook 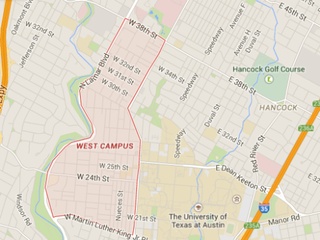 Map of the West Campus area. Courtesy of Google Maps

The Austin Police Department is investigating a spike in home and auto burglary cases in the West Campus area.

According a press release from APD, there have been nine home burglaries, 18 vehicle burglaries and seven auto thefts in the past month alone.

APD says the majority of the thefts and burglaries occurred in unlocked homes and cars, reminding Austinites to lock their doors and hide possessions from plain sight. In regards to vehicle thefts, the perpetrators appear to be targeting more expensive cars, like BMWs. "In two of these cases, the keys were left in the car and in three of the cases, the keys were stolen from a home or another vehicle," the department says in the press release.

APD has not released information on whether these acts were a concentrated effort or a coincidence, but the department did reassure that "special initiatives" will be taken in the area in response to the spike.

According to the police chief's monthly statistics reports the number of property crimes in Austin has increased from 3,075 incidents in September 2014 to 3,242 in October 2014; both months saw a decrease from 2013. Statistics for November have not yet been released.

The West Campus area has experienced a spike in home and auto burglaries.  Courtesy of Austin Police Department/Facebook

Take a peek inside a one-of-a-kind European chateau on Lake Austin
Gorgeous Italian escape on Lake Austin is an elegant hidden gem
Law, tech, and a sense of humanity put one Austin Realtor on path to success