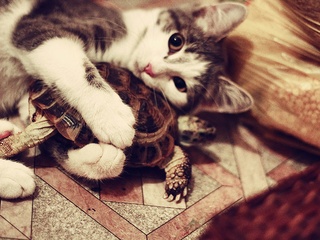 It takes commitment to cuddle with a turtle. Buzzfeed.com

1. Bill Gates gives awesome Christmas presents. You probably could have guessed that billionaire philanthropist and technology mogul Bill Gates is a pretty great gift-giver. But to prove his awesomeness, Gates participated in a secret Santa exchange on Reddit. Gates gifted the book Journeys of a Lifetime: 500 of the World's Greatest Trips, a stuffed cow and an undisclosed donation to the charity Heifer International.

3. The 40 best animal cuddlers of all time. Sure, some animals are fluffy and inviting, but it ain't easy cuddling up to a tortoise. Buzzfeed rounded up the cutest, most impressive feats of cuddling this side of heaven. As well as the cursory dogs and cats, pigs, raccoons, foxes and even birds get in on the snuggle fest. Pass the blanket, please.

4. Mind-reading headset translates dog thoughts into human language. Granted, it's just a prototype at this point, but No More Woof has high hopes of turning the theoretical, crowd-funding corner and entering the real world. The device was created by scientists at the Nordic Society for Invention and Discovery, and really, what would be cooler than hearing your dog talk while cuddling with you?

5. Time magazine's most surprising photos of 2013. Funny photos are a dime a dozen, but in the age of instant information, it takes a special photo to really shock us. Phil Bicker, senior photo editor at Time, selected 130 (!) photos that will confuse and amaze you.