Turn The Lights Off
Austin Energy summer rate hike set for June 1
LATEST NEWS
The stars at night are big and bright at this stunning $18.5M ranch
These Ants Are Loco 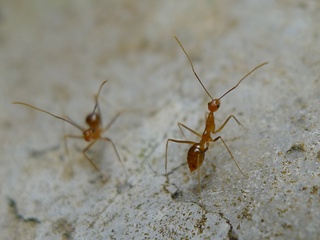 Crazy ants are driving fire ants out of their natural habitats in Texas and the Southeast.  Photo by John Tann

According to University of Texas at Austin science researchers, the common fire ant is at risk of being displaced by the Tawny crazy ant, which is not the same as Tammy, your crazy aunt.

In a recent study published in Biological Invasions, the scientists from the Texas invasive species research program at the Brackenridge Field Laboratory call the crazy ants “ecologically dominant.”

The crazy ants first came from South America in the early 2000s to suburban Houston and have since flourished as they continue to spread both naturally and accidentally by humans.

​ “When you talk to folks who live in areas [invaded by crazy ants], they tell you they want their fire ants back,” says UT researcher Ed LeBrun.

Although they don’t carry the venomous bite of the fire ant, crazy ants will venture anywhere they can and nest in whatever is convenient, including ventilation ducts and electrical boxes. This causes plenty of problems outside of just having ants, such as shorted circuits and blown fuses.

What makes them interesting to researchers like Ed LeBrun and his colleagues at UT is how their very high population density drives out red fire ants from their habitats.

“When you talk to folks who live in the invaded areas, they tell you they want their fire ants back,” LeBrun says in a video on the college’s YouTube channel. “Fire ants are in many ways very polite. They live in your yard. They form mounds and stay there, and they only interact with you if you step on their mound.”

Crazy ants, formally known as Nylanderia fulva, are harder to control than fire ants because they don’t bite on the same kind of poison and their colony boundaries are very different. They don’t colonize as a mound in the yard like fire ants do.

Their population density can be up to 100 times that of the fire ant, and they monopolize food sources to drive out other species, not just ants.

LeBrun says that this will ultimately impact the entire ecosystem, as the Southeast and Texas have adapted to the presence of fire ants since their introduction in the 1930s.

“Imported fire ants are the 300-ton gorilla out there in Texas ecosystems these days,” LeBrun says. “They’ve been there for 40 years, and they’ve really altered the system. They’ve altered it in such a way that the system has adjusted to the presence of imported fire ants.”

LeBrun says the crazy ants’ growth can be thwarted by making sure you don’t accidentally transport them to new areas in your car or RV since they are opportunistic nesters that will nest in just about anything, including nursery products.