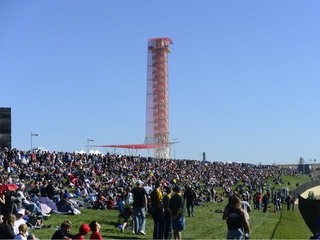 Austin's newest concert venue will open at 8 p.m. on April 5 with an inaugural performance by country superstar Kenny Chesney.

The Austin 360 Tower Amphitheater is located in the center of the Circuit of the Americas (COTA) race track underneath the iconic 220 foot tall observation tower. Show capacity at the theater is about 15,000 with just over 5,000 seats and a large grass berm for general admission. COTA calls it the largest permanent stage in Austin.

The show represents one more step in COTA's plan to make the circuit a 365 day events destination. Last week COTA made a bid to host the ESPN X Games from 2014 through 2017 and is looking to add tennis to their sports schedule. In addition to sports and concerts, COTA is hosting a number of conventions and last month began hosting gala events.

Chesney, the biggest ticket seller in country music and four time CMA "Entertainer of the Year," is set to kick off his "No Shoes Nation" American tour March 16. He just added 26 new dates to the tour, expanding to 46 stops including Austin. Kacey Musgraves will open for Chesney.

“We’re thrilled to open our new Tower Amphitheater, which will be the largest outdoor entertainment venue in Central Texas, with the No. 1 ticket seller in country music today,” Circuit President Steve Sexton said in a press release.

“Kenny Chesney is a remarkable and engaging performer, a true fan favorite and one of the elite touring artists in the world. The Tower Amphitheater will showcase the biggest names in music, and for our very first show, it doesn’t get much bigger than Kenny Chesney.”

Tickets for the show start at $45, which does not include parking — and you will need parking — that will cost an additional $12.

COTA plans 15 concerts over the course of this year, the next actual race — Grand-Am — happens March 1 and 2.

Tickets for Kenny Chesney go on sale Saturday, January 26 at 10 a.m. and are available through Ticketmaster online or via phone at 800-745-3000. General admission tickets will cost $45, reserved seating is $85 and premium tickets are $150. Parking starts at $12. For more information check out the Tower Amphitheater website.