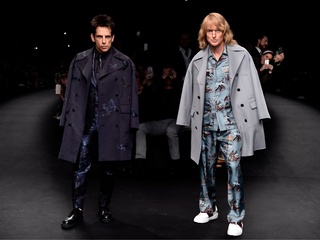 It's time to pick a side, people.  VerticalResponse.com

1. Did you know that the Girl Scouts use two bakeries and that there are different versions of the cookies? This is big people. There's a graph. If The Dress didn't divide this country enough already, the Peanut Butter Patties vs. Tagalongs battle surely will.

2. Zoolander and Hansel (so hot) walked the Valentino runway during Paris Fashion Week. Ben Stiller and Owen Wilson announced that Zoolander 2 will debut February 12, 2016. It's a good thing that Blue Steel doesn't rust.

3. Katie Couric interviews The Fat Jewish while they get pedicures. In five years, we're going to look back at 2015 and be like, "Can you believe the president got famous on an Instagram account?"

4. The full-length trailer for Pixar's Inside Out is, um, out. You are going to cry. You are going to cry so damn hard. Like that ugly kind of crying when you're just a mess and your nose is all bubbly and gross and nobody will judge you because they'll be ugly crying too.

5. Who's worse: Gwyneth Paltrow or Lena Dunham? Some of these quotes are real; some are fake. But by the time you get to No. 4, you should be close to stroking out.