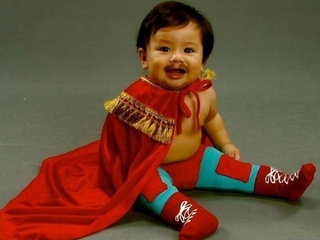 Nacho Libre is the unexpected hero of Halloween. Photo via Huffington Post

Editor's note: There's so much that's beautiful, funny, smart and informative on the Internet. Problem is, there's also a bunch of garbage. Here's the best of the web right now.

1. Twitter hates Adam Sandler's Netflix deal more than Jack and Jill. And that's saying something. Netflix unleashed a torrent of Twitter haterade when it announced a four-movie deal with the (formerly) funny man Adam Sandler.

2. Incredible animal gatherings across the globe. The Telegraph whips out its telescopic lens to capture amazing images of mass animal migration from around the world.

3. This new Disney movie is guaranteed to take you on an emotional roller coaster. It's called Inside Out, and it's about the secret lives of emotions ranging from joy, fear, sadness and disgust. More than 1.3 million people have already watched the trailer.

4. These baby Halloween costumes are what quality parenting is all about. Most days parents wouldn't dream of drawing scars on their baby's face or affixing a tail to their adorable little tushie. But on Halloween, that bald baby is a blank canvas waiting to be exploited for entertainment.

5. Drones capture amazing video of volcano erupting in Iceland. The use of drones may be controversial at times, but no one's complaining that a photographer strapped GoPro cameras on unmanned aircrafts in Iceland. The footage offers a rare glimpse into the eye of a volcanic eruption.

Nacho Libre is the unexpected hero of Halloween. Photo via Huffington Post