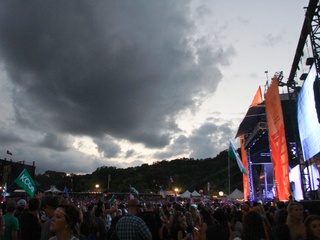 The final day of the Austin City Limits Festival on Sunday, Oct. 13, is canceled due to flash flood warnings and overnight rains of up to 11-inches in the area, marking the first time in the festival's history that the event has been cut short.

"Our first priority is always the safety of our fans, staff and artists,” said Shelby Meade, communications director for C3 Presents, the promoter behind Austin City Limits Music Festival. “We regret having to cancel the show today, but safety always comes first."

Refunds will be issued automatically by check from Front Gate Tickets within three weeks, according to a statement released by C3. One-third of the ticket price will be refunded to all ticket buyers based on original ticket price paid, and will be mailed to the billing address on the original order, the statement says.

The first Austin City Limits Festival ran for two days during its inaugural year in 2002 and has been through its share of rains and mud pits, heat waves and dust bowls, but the festival has never canceled an entire day. Unexpected deluges that brought nearly a foot of rain to some areas made the weather, which includes flash flood warnings for Travis County through early Monday, too dangerous for festival organizers to continue.

Tonight's headliner was to be Lionel Richie.