By Claire St. Amant
Oct 23, 2014, 8:58 am
Shia LaBeouf: cannibal or not? Photo by Frantogian/Wikimedia Commons 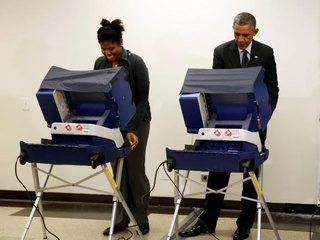 President Obama jokes with a woman during early voting. Photo via IBT

Editor's note: There's so much that's beautiful, funny, smart and informative on the Internet. Problem is, there's also a bunch of garbage. Here's the best of the web right now.

1. Just a song about Hollywood superstar and actual cannibal Shia LaBeouf. Don't let Gawker's cavalier headline fool you. An elaborate stage presentation from Rob Cantor and the Gay Men's Chorus of Los Angeles, "Shia LaBeouf" Live is so much more than a song.

2. Man warns Obama not to touch his girlfriend and POTUS plays along. Voting photo opps are typically boring affairs, but President Obama's trip to cast his ballot in Chicago proved to be wildly entertaining for the woman next to him.

3. Toys R Us pulls Breaking Bad action figures after petition. It's hard to say why anyone ever thought the ultra-violent, drug-addled TV show Breaking Bad should be commemorated with children's toys, but it happened. An angry mom called out Toys R Us with an online petition, and the store agreed to put the action figures on an "indefinite sabbatical."

4. Walter the Labrador goes for a run and a swim. This GoPro video from Italy is taking a few victory laps around the Internet. More than 14 million people have watched Walter run with abandon into the ocean.

5. Are you a dog person or an ant person? We love killing time with Buzzfeed quizzes as much as the next cubicle dweller, but that doesn't mean we can't poke fun at the banality of it all. ClickHole, a Buzzfeed parody site, hits the nail on the head by asking if we like ants or dogs.

Shia LaBeouf: cannibal or not? Photo by Frantogian/Wikimedia Commons