13 Halloween movies to binge on this weekend

13 Halloween movies to binge on this weekend 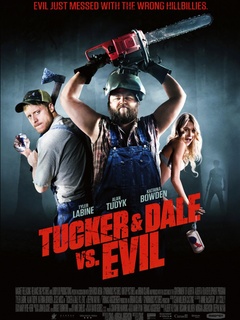 In this hilarious twist on the psycho-hick-kills-beautiful-young-people-in-the-woods plot, the hillbillies are actually the good guys.  Courtesy photo

Halloween is here so all of the freaks and creeps are out to play. We recommend you stay safe by locking your doors, checking under the bed for monsters and curling up on the couch with one (or more) of these Netflix movies that are just perfect for Halloween weekend.

Carrie double feature (1976 and 2013)
Starring: Sissy Spacek and Chloe Grace Moretz
Critics say: Thumbs up on the original and "you decide" on the remake
Synopsis: Carrie is a horror classic about the dangers of bullying, bad parenting and — oh yeah — out-of-control telekinetic powers. Both the original and the remake are on Netflix right now, so make it a double feature and choose which version is better.
Bonus: Whether you're re-watching the original Carrie or seeing it for the first time, it never disappoints.

Tucker & Dale vs. Evil (2010)
Starring: Alyn Tudyk and Tyler Labine
Critics say: Thumbs up
Synopsis: In this hilarious twist on the psycho-hick-kills-beautiful-young-people-in-the-woods plot, the hillbillies are actually the good guys. It's a comedy-horror, so definitely give it a chance if you need a laugh.
Bonus: It pokes fun at the inherent stupidity of a typical horror film victim.

Stake Land (2010)
Starring: Connor Paolo and Nick Damici
Critics say: Thumbs up
Synopsis: Martin and his mentor, Mister, are traveling through rural America after a vampire virus sweeps through the country. It's a fresh take on a slightly post-apocalyptic world where humanity and religion are often just as bad as vampirism.
Bonus: Great character development and some truly cringe-worthy moments.

V/H/S and V/H/S 2 (2012 and 2013)
Starring: A lineup of multiple different directors
Critics say: Mixed reviews
Synopsis: Both movies open with the same premise: unsuspecting people begin watching a stack of eerie VHS tapes in a seemingly abandoned house. Each film is an anthology of scary shorts traveling across the spectrum of horror genres, so you can be creeped out in a plethora of ways!
Bonus: The third installment, V/H/S: Viral, is out on video-on-demand and opens in a few theaters on November 21.

Event Horizon (1997)
Starring: Sam Neill and Laurence Fishburne
Critics say: Thumbs down
Synopsis: Dr. Grant and Morpheus are in space answering a distress call from the ship Event Horizon, which went missing seven years before. What they actually find takes them and the rest of the crew into a nightmarish hell.
Bonus: Sam Neill in an increasingly creepy role.

Contracted (2013)
Starring: Najarra Townsend
Critics say: Thumbs halfway up
Synopsis: After drunkenly hooking up with a guy at a party, Samantha slowly succumbs to what she thinks is an awful infection (cough ... zombie ... cough).
Bonus: After watching this you'll never want to have a one night stand again.

Re-Animator (1985)
Starring: Jeffrey Combs
Critics say: Cult classic
Synopsis: Dr. Hans Gruber discovers a way to bring people back from the dead ... but they're not quite the same as they were when they were alive. Re-Animator is super gory and gross, which might make you feel a little guilty laughing at the funny parts.
Bonus: It's based on an H.P. Lovecraft story.

American Mary (2012)
Starring: Katharine Isabelle
Critics say: Thumbs up
Synopsis: In order to pay for her medical school costs, Mary Mason begins performing black market body modifications. However, when something truly awful happens to her, she takes these newfound skills and uses them for sweet, sweet (and bloody) revenge.
Bonus: This film is the true definition of black humor.

Pontypool (2009)
Starring: Stephen McHattie
Critics say: Thumbs up
Synopsis: The small city of Pontypool, Ontario becomes overrun by a strange disease that infects spoken words and turns its inhabitants into raving, bloody lunatics. This film will really make you think about the power of language.
Bonus: If you like it, check out the original novel Pontypool Changes Everything by Tony Burgess.

Maniac (2012)
Starring: Elijah Wood
Critis say: Mixed reviews
Synopsis: The story follows a serial killer as he escalates from creepy mannequin shop owner to full-fledged psychopath. After watching it you'll feel grateful for having a scalp that is firmly attached to your head.
Bonus: The entire film is shot from the perspective of the killer.

The Frighteners (1996)
Starring: Michael J. Fox
Critics say: Thumbs mostly up
Synopsis: Michael J. Fox can commune with the dead so he uses his power to hang out with his ghost friends and try to solve the mystery behind his town's rash of violent murders. If you're looking for something that can get you into the Halloween mood without being too scary, then this movie is perfect.
Bonus: It's directed by Peter Jackson (of the Lord of the Rings trilogy) and co-written by Jackson and his wife.

John Dies at the End (2012)
Starring: Chase Williamson, Rob Mayes and Paul Giamatti
Critics say: Thumbs mostly up
Synopsis: Remember when we were told to just say no to drugs? You'll agree with the elementary school mantra after watching this film. David Wong and his friend, John, get sucked into a world that can only be described as "WTF?" after taking a street dug known as Soy Sauce that drastically changes how they see things. This film is adapted from a novel by the same name written by David Wong. Bonus: David Wong also writes for Cracked.com.

Antiviral (2012)
Starring: Caleb Landry Jones and Malcolm McDowell
Critics say: Mixed reviews
Synopsis: In a not-so-distant future, our society has become so obsessed with celebrities that we'll eat lab-grown steaks grown from their DNA and inject ourselves with whatever disease they have. Even though it's not your typical Halloween movie, it makes the list because it will literally get under your skin … and because, one day, it could be true.
Bonus: It's directed by Brandon Cronenberg, son of acclaimed director David Cronenberg (Videodrome, The Fly, Crash, Cosmopolis).