Doug Sahm will be celebrated on the 14th anniversary of his death.  Courtesy of Doug Sahm / Facebook 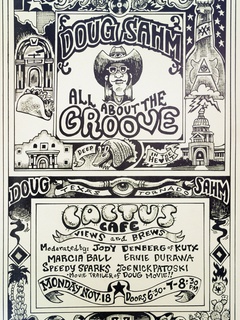 Views and Brews is Monday, November 18, at 7 pm at the Cactus Cafe.  Courtesy of Joe Nick Patoski

A pioneer of the Austin music community, Doug Sahm was the master of so many authentically "Texas" sounds — western, Tex-Mex, rock 'n' roll — that live on in the music of the Texas Tornados and the Sir Douglas Quintet.

Though he passed away in 1999, Sahm's influence is weaved into Austin music culture. Next week, KUT (along with a few choice friends) hopes to preserve that influence for generations to come.

"His story is the story of Texas music — no individual could play Texas's indigenous sounds so skillfully and authentically," says Joe Nick Patoski

On Monday, November 18, the Cactus Cafe will host a special edition of Views and Brews titled "Doug Sahm: All About the Groove." Hosted by Jody Denberg, the celebration of Sahm will include local music royalty Marcia Ball, Speedy Sparks (Sahm's bass player) and Ernie Durawa (drummer for the Texas Tornados), as well as noted Texas writer and historian Joe Nick Patoski.
The event takes place on the 14th anniversary of Sahm's death and will explore Austin music in the early 1970s, as well as Sahm's influence on the local scene's becoming nationally — and internationally — recognized. Panelists hope to celebrate a true Austin stalwart, opening the eyes — and ears — of younger generations to a soulful sound that still plays an important part in our modern culture.
(If you want proof, just wander down the block to Hole in the Wall, where Sir Doug's music is immortalized in the jukebox.)
"For me, Doug is one of the touchstones of Texas music and one of the early founders of Austin's vibrant music community. He's a major reason I moved here in the early '70s," says Joe Nick Patoski.

"It's time to let folks who have no idea who this Sahm character was/is appreciate one of the most beautiful cats to have graced a stage in Austin."


"His story is the story of Texas music — no individual could play Texas' indigenous sounds (country-western, western swing, rhythm and blues, jump blues, conjunto and rock 'n' roll) so skillfully and authentically. At the same time, he represented my generation of Texans, who thought differently and outside the box [and] who had to come to Austin to find our place."
During the event, Patoski will premiere the sizzle reel of a proposed documentary about Sahm. "Jan Reid wrote a fine biography of Doug. The world doesn't need another Doug book," he says. "Printed words are great, but for those of us who knew Doug, there's really no better way to tell his story than with his music, his voice and the voices of others who worked and played with him. In other words, on film."
If the reel does its part, Patoski plans to secure funding and have a full documentary finished in time for SXSW 2015. "[Fourteen] years after his passing," says Patoski, "it's time to let folks who have no idea who this Sahm character was/is appreciate one of the most beautiful cats to have graced a stage in Austin."
---
Views and Brews takes place at the Cactus Cafe on Monday, November 18. Doors open at 6:30 pm, and the event runs 7 pm - 8:30 pm. Entry is free, but donations are accepted.

Doug Sahm will be celebrated on the 14th anniversary of his death.  Courtesy of Doug Sahm / Facebook

Northwest Hills: The centrally located 'hood with a musical past
Four Points: An area expert sums up this quartet of neighborhoods
Rollingwood: Area expert touts its downtown proximity and blooming nature