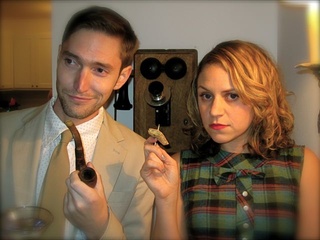 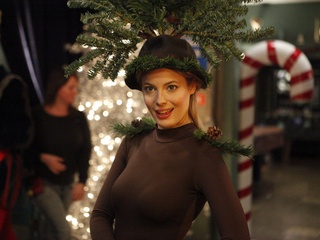 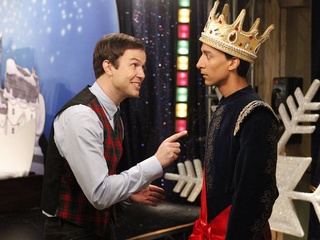 Ever since news broke that critically acclaimed comedy Community wouldn’t appear on NBC’s midseason schedule next year, dedicated fans and television critics far and wide rallied around the show to make sure their voices were heard—before it would be too late.

New York magazine created WWII-inspired “Save Community,” posters while tech-savvy fans made sure to tweet the advertisers that aired commercials during episodes to show their support. Fans also voted the show as TV Guide Magazine’s 2011 Fan Favorite, even before news of the midseason benching broke—and, New York magazine recently included the show in their top 10 TV shows of 2011 list. Just a few days ago, Paste magazine named Abed Nadir (played by Danny Pudi) the best TV character of 2011. The cast of Community even starred in a “Save Greendale” PSA on CollegeHumor, also popping up on The Soup (star Joel McHale's comedic alma mater) to cleverly promote the show.

With Community supporters standing firmly behind their show, creator Dan Harmon and his team of writers have continued working around the clock to pen hilarious episodes, like last week’s anime-infused “Foosball and Nocturnal Vigilantism.” Tonight’s musical episode, “Regional Holiday Music,” written by Steve Basilone and Annie Mebane, will be no different.

The musical will mark the last new episode of the series before it goes on an indefinite hiatus. The episode will be sure to provide plenty of laughs as our beloved gang gets recruited by the Greendale choir director (SNL cast member Taran Killam) to fill in for an absentee glee club.

Fans will remember that this won’t be the first time the gang has filled in for them, either. Check out this clip of the study group “sing-a-ling-ding-dong-ing” in the glee club last season.

The show has brilliantly dabbled in the musical genre before, so fans and critics need not worry about the show’s ability to execute a musical episode. Sneak previews have made their way online and fans can look forward to multiple Glee jokes as well as a rap number by Troy and Abed that could end up rivaling their classic, “La Biblioteca.”

CultureMap was fortunate enough to speak with the writers of “Regional Holiday Music,” Annie Mebane and Steve Basilone, about tonight’s musical extravaganza, fan support for the show and the future of Community.

What was the inspiration behind writing a musical episode?

Annie Mebane: Well, we were talking about what Christmas should be, and I know we had a musical agenda and Dan [Harmon] had always toyed with doing something that dealt with Glee, so we lucked out that it worked out for us and it was the right time to do it.

Steve Basilone: We kind of pitched it this way and danced around a bunch of different ideas and were fortunate to land on it; it was something that Annie and I had talked about that we thought would be pretty cool.

And how different was it writing a musical episode compared to a regular episode?

AM: It was fairly similar except we had to have some extra time to write the songs and to figure out what the themes of the songs should be.

Did you both write the songs in the episode, or did the writers all collaborate?

SB: Well initially, in the first draft, Annie and I wrote three or four placeholder songs; we ended up re-breaking the story and so it ended up being more Annie and Dan. And I mean, Dan is great.

AM: Yeah, and you know, we were here a lot of late nights so everyone pitched in writing — like Dan and Ludwig came in over the weekend, too, and we wrote songs with Dan and it was a lot fun.

The Troy & Abed rap video that was uploaded earlier this week was amazing. How was filming that?

AM: It was great. That [scene] was shooting for most of the day and it was really cool to watch that in the monitor and to see it from all the different angles. I mean obviously, Donald has his ‘Childish Gambino’ alter ego, so it was really fun to have him rapping and stuff. It was fun to also see Danny Pudi show off the rapper in him.

Who came up with the lyrics?

Were any of the actors hesitant about a musical episode, or were they all pretty much on board?

AM: You know, they’re all so talented and so committed — they just rolled with the punches and learned the songs really quickly. Alison recorded her songs in like two takes, she’s really amazing. And I mean they’re all — Yvette and her amazing singing voice and Chevy, his singing in the episode is amazing — they’re all just really talented, quick, sharp performers, so it was a lucky thing that the show made it this easy for us to do a musical.

How do you both feel about the musical episode being the last episode before going on hiatus?

AM: You know, we’re sad that the show is going on hiatus because even before we were on the show, we were huge fans of it. It would be awesome if it got the ratings that we feel like it deserves — and I’m sure a lot of the fans feel like it deserves — but it’s just a great sendoff and hopefully it’ll make people smile before they might not see the show for a few months.

SB: Yeah, I mean we’re excited that we get to go out on a really positive note and we’re really proud and excited to take part of that final note, but we’re bummed out that that’s the way it has to be. But hopefully it leaves a positive impact and resonates with people so whenever we do come back, we’ll come back stronger.

Seeing as how Community and Glee both film at the Paramount Lot, I always felt like there was some sort of unspoken rivalry between the two shows. Did that play any part in writing the episode?

SB: I don’t think there’s a rivalry — we all work too late, never leaving this office to even have a rivalry with Glee — but I don’t watch the show religiously and you don’t either, right?

AM: No, but I appreciate that something like that is on TV.

SB: Yeah absolutely, I think we both appreciate that there is something like that on television, but also recognize some of the bigger, broader things like these things are kind of absurd. We can kind of poke fun at it but also realize it has a positive message for kids.

Has the amount of fan support for the show helped you as writers?

AM: It’s always great to know that the fans like the show.

SB: I think it’s heartening, for sure. Especially to know that people appreciate what you’re doing and that there’s a positive response for all your hard work.

AM: And I think particularly Dan puts his heart and soul into this show, so I feel like he should get a lot more accolades, as well as the show in general.

SB: Yeah everybody’s been working really hard, but Dan in particular — I mean, the guy doesn’t sleep most nights, so...

How do you feel about the future of Community? Do you think the show can live on past NBC, like Arrested Development with Netflix?

AM: I feel optimistic. I know Parks & Recreation did well in their situation in the past and hopefully this’ll be the chance for NBC to try a different time slot or something.

SB: I mean, it might be an opportunity for them to rework, or perhaps they can rebrand it,  or try out a new time slot with fresh eyes and spend more money on promotional stuff — you know, whatever happens, we’re still going to finish off the season strong.

And just for clarification purposes, episodes are still being produced and written, correct?

AM: Definitely, the episodes are still really fun. With this exceptional staff, I think when the show comes back, the fans will have a lot to look forward to.

SB: We’re still writing episodes as we speak so, buckle up folks!

So there you have it. Community is one of the smartest shows on television and fans should rest assured that Dan Harmon and the writers are still working hard as ever to finish out the season strong. Be sure to clear your schedules tonight and tune into the musical extravaganza that will be Community at 8/7c on NBC.

Community airs tonight at 8/7c on NBC and you can catch up on every episode of Community on Hulu.

Four Points: An area expert sums up this quartet of neighborhoods
Tarrytown: A native shares her favorites in this idyllic neighborhood
Lake Travis: Mother-daughter duo deliver the goods on resort lifestyle