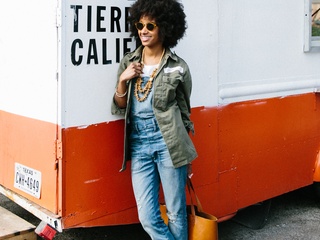 Asli Omar of The Tontons is featured in Madewell's spring campaign. Courtesy of Madewell

Madewell is ushering in the spring season with a new collection and a national campaign featuring Texas' own Asli Omar.

Omar, the lead singer of the Houston-based indie rock band The Tontons (also frequently seen on Austin festival lineups) is featured in the “Life Madewell” campaign, which portrays the everyday, effortless lifestyle of the brand that focuses on denim and other basics.

The band, which started in 2007 and is comprised of Omar, Tom Nguyen, Adam Martinez and Justin Martinez, has been featured in several national media outlets. Their song “Golden” is the soundtrack of the Everyday Madewell campaign video.

The spring campaign, unveiled Tuesday, “is documenting the lives of creatives, artists and overall badass women across the country,” the chain said in a press release. A “Day-in-life” video shows Omar in Madewell overalls styled with her favorite pieces as she sips tea in her Houston home, stops by Tierra Caliente taco stand on West Alabama, roams Montrose Boulevard and Midtown, where she stops into Sig's Lagoon record store.

The brand will also be releasing a detailed interview with Omar and the other subjects on the Madewell blog.

To kick off the spring collection, Madewell stores will also be hosting an event on Thursday from 6-9 pm where you can donate denim and get $20 off on a new pair of jeans, sip some wine and listen to beats by a local DJ.