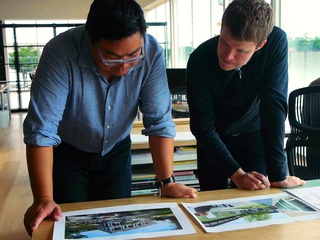 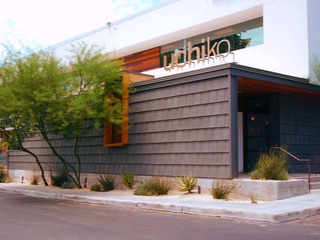 Michael Hsu's success as an architect doesn't come from an inkling for power; rather, it's born out of a simple predilection to do what he loves. In fact, if anything, Hsu says he felt reticence to start his own business after watching his parents struggle as small business owners when he was a child.

However, odds are that if you've ever been to one of Austin's more popular dining establishments — from as high-end as Uchi to as approachable as P. Terry's — you've stood within Hsu's work, which now serves as a permanent fixture to the city's landscape.

Yet Hsu's breadth of work encompasses much more than the restaurants he's rightfully well known for. Michael Hsu Office of Architecture lends a soft but powerful hand to modern design, infusing tightly edited spaces with raw materials that provoke a comfortable, organic feeling for those within them, whether they be a single family home or large commercial space.

"At the end of the day what our goals are is to not so much inject a lot of style into a project, per se, or design 'up,' but create environments that feel right and appropriate for what's going on," explains Hsu of his firm's work, which also includes Mercury Hall, Olivia, La Condesa, Akoya, Emo's East, Ferrari of Austin and countless residential projects.

"We don't have any preconceived notions of what a space should be, though we have guiding principles on what we feel like is good design. We try to stay very open minded."

The firm was founded in 2005 with the mission of producing locally-engaged design and architecture in Austin. "We try to roll a lot of local crafts people in our projects to give it that handmade one-off look and a very homegrown feel," he says of his tendency to source metal workers, lighting fabricators and the like from the talented pool right here at home.

"The way Austin continually creatively redefines itself is what I feel like is the most exciting part about [the city]," Hsu explains. "We have a relatively young staff… for a lot of the jobs we have, we tend to bring young people up from the bottom and they bring a fresh approach to how we look at things."

Hsu's humble acceptance of his firm's stellar success parallels the group's conscientious approach to new projects. "There's a spirit here that's about trying to listen very carefully first before making decisions," Hsu explains. "We don't have any preconceived notions of what a space should be, though we have guiding principles on what we feel like is good design. We try to stay very open minded."

"As an architect," Hsu says of entrepreneurship, "it's not so much business as it is creativity."

"I feel like an entrepreneur is about being creative no matter what it is that a person is pursuing — thinking and rethinking things even though they may have been done a certain way for a long time, just being willing to consider and question whether or not there's a better way, or a different way, or a more interesting way to go about it."

Austin, and its culinary scene in particular, has certainly reaped the benefits of the thoughtfulness Michael Hsu Office of Architecture has put into its projects. From the looks of the firm's diverse roster of clients, it appears the city will only continue to be influenced by Hsu's vision as it grows into a formidable urban center, requiring more livable, honest, inspiring community spaces.