Next in Line
Next in Line: Bourbon expert Larry Miller crafts the classics at Péché

Despite rumors, The Omelettry is not closing and still plans Airport Boulevard move

Despite rumors, The Omelettry is not closing and still plans to move 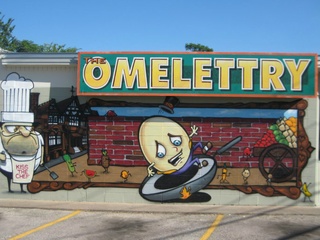 The Omelettry will remain open on Burnet Road until its March move to Airport Boulevard.  Courtesy of Omelettry / Facebook

Last spring, The Omelettry announced it was leaving its original Burnet Road location for a new spot in the Concorde Center at 4631 Airport Blvd. Since making the announcement, the famed eatery has faced a series of construction delays that in turn have sparked rumors that it was actually closing permanently.

Not so, say the restaurant's owners, who issued a press release Friday to quell the gossip. "We’ve had some awful delays in getting our building permit, and a couple of weeks ago our contractor for the project suddenly died," says Joni Carpenter. "My husband [co-owner Kenny Carpenter] is taking on the the job of general contractor in addition to ... running the restaurant."

Despite the setbacks, the owners have continued to move forward with the new space and recently installed a sign. While the original opening projection of October 2014 has come and gone, Carpenter says The Omelettry's new location should be sometime in March.

The restaurant will remain open on Burnet Road until a few weeks before the move.