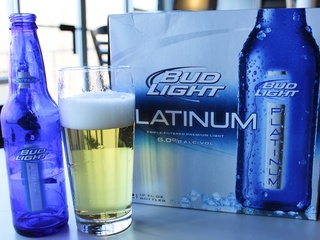 Anheuser-Busch is aiming to break out of its longtime status as a tailgating staple and step into the nightlife scene with Bud Light Platinum, a new higher-alcohol-content offering that launched in Texas — ahead of the rest of the country — in late January.

Platinum has 6 percent alcohol by volume, as compared to Bud Light's 4.2 and Budweiser's 5 percent. We chatted with Silver Eagle distribution's senior director of marketing Camilo Rojas about the impetus behind the brand launch, which he said was a result, in part, of competition from the spirits market.

"The last few years we've had a lot of competition from vodkas, whiskeys, liquors and so on. Bud Light Platinum is to kick the fight back to them," Rojas tells CultureMap. "We're going after the influencers — the 21 to 27-year-old coed crowd at nightclubs, discos and other places you typically see alcohol consumption."

Bud Light Platinum tastes pretty similar to Bud Light, albeit a touch sweeter. But with 137 calories per 12-ounce bottle (Bud Light classic has only 110; Bud heavy has 145) there's not much "light" about it. We're not distribution gurus, but no woman in the world we know is going to drop the vodka sodas for a 137-calorie serving.

And while 6 percent is certainly more in-line with boozier craft brew offerings, it's still no 80-proof and might have a tough time luring the bottle-buying, shot-taking set to instead kick back with a beer.

Rojas says a ton of national media has already been thrown behind the brand, including a Super Bowl spot.

But we want to know your thoughts. Tell us: Would you like to bounce with a Bud Light that's platinum?