Blind Café is revolutionizing how you experience dinner in Austin

Blind Café is revolutionizing how you experience dinner in Austin 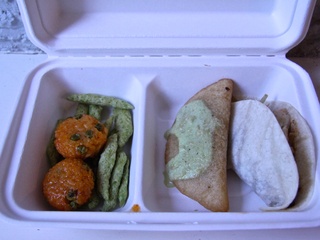 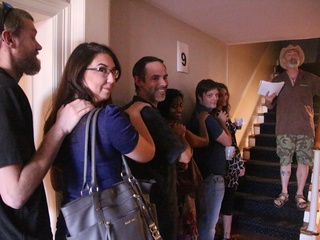 Guests line up for the experience.  Photo by Veronica Meewes

The sun is setting as clusters of people start to congregate on the expansive lawn of the Charles Johnson house, a pre-Civil War mansion which now serves as an event space. Golden light filters through the live oak branches and the crowd comes together between the sweeping white columns of the front veranda. Tonight’s dinner will be different than most and requires directions.

“You’re going to be led into the dining room by the waiter, holding each other’s shoulders like this,” explains Brandon Langdon, who’s sporting a cowboy hat and a jovial demeanor. “You don’t want to let go because it’s going to be completely pitch black in there.”

“The first 20 minutes is most challenging of this event, so we have a buddy system,” adds Rosh Rocheleau. “And your job is to help each other not lose your shit.” Once everyone is seated, Rocheleau tells them they’re free to “chat away, do back flips, yoga, whatever you want to do. I don’t know — I’ve never seen the event!”

We file into the dark, hands on each other’s shoulders as instructed. We are here for Blind Café, a touring sensory experience meant to connect people and raise awareness for the visually impaired. Started in Boulder in 2010 by Rocheleau, Blind Café has now put more than 10,000 people in the dark in Seattle, Portland, San Francisco and Austin.

Rocheleau attended a café in the dark while traveling through Iceland, and decided he wanted to recreate a similar experience, using music and food to build community. Proceeds from each event go to a local blind community. This one benefits The VEX Project, an organization which empowers the blind through career mentoring and professional consultation.

“We’re using darkness as a tool to initiate social change and we also have a blind awareness element,” he explains. “I hope that [Blind Café] puts guests in touch with themselves in a way that helps them learn and grow and pay attention to how they relate to themselves and each other.”

Blind servers led each line of guests into the pitch black dining room one at a time. I felt my own steps immediately become an uncertain shuffle as I gripped my server’s shoulder a little tighter. Once in the dining room, I determined the corner of the table, then the shape of a chair. Voices crescendoed and everything seemed so far away.

Our meal, prepared by The Lavender Finch, was graciously prepared to be eaten as easily as possible. A cold avocado coconut cream cilantro soup came in a cup with a lid, while a box held some textured finger foods. We let the blind tasting begin, and it was eye-opening to realize how much we initially rely on vision.

“I think these are Cheetos,” I heard my husband insist several times through the abyss. (They were definitely not Cheetos, yet it took me several minutes to identify them as the same puffed snap pea crisps I’d eaten on a drive back from Marfa last year. Then suddenly, the vivid memory of that taste and the West Texas landscape lit up behind my eyes.)

The rest of the vegetarian menu included paella arancini, Asian barbecue mushroom tacos with an almond butter cabbage slaw, and cauliflower lentil empanadas. Our table passed around a bread basket, which in itself was a feat (as was the dangerous exchange of a red wine bottle). For dessert, we passed around a container of gluten-free chocolate chunk cookies with dried cherries and chipotle flakes.

As we ate, the servers facilitated a Q&A session led by keynote speaker Richie Flores. Guests freely asked questions like “Do you touch people’s faces to know what they look like?” and “What do your dreams look like?” The speakers ranged from Flores, who has been blind since the age of 3, to our own server, who lost his vision suddenly in an accident at the age of 11. Their stories were captivating and I found myself piecing together imagined likenesses from the tone and cadence of their voices.

“There are emotions that we all go through that are invisible,” said Flores. “A lot of us call it faith, some of it interpret that as love and I think all of us want it to be peace. And it’s things that we can’t see but we know exist.”

Next, Flores and his band The Constellation Prize played, followed by Rosh and the Blind Cafe Orchestra. Somehow, listening to music in the dark felt so natural. I started to sense movement around me — a scuffling of feet and a shifting of air as people started to dance.

“When you listen to the words of our music, you interpret that in your own head and decide what it means to you,” explained Flores. “When you eat the food without looking at it, you have to guess — you have to imagine. When you have a conversation without looking at someone, it becomes more of an experience of getting to know each other by listening. You have to pay attention.”

After the final song, which had everyone clapping and stomping, Rocheleau struck a match and lit a single candle, revealing a room much smaller than expected. Voices finally hushed as we all looked around at each other.

“We’re all in our heads a lot and I think there’s something about gelling up that experience in the dark,” Rocheleau later expressed. “If everyone can come to a place of gratitude and openness and self realization, then we’ve done our job. But it’s not always up to us.”