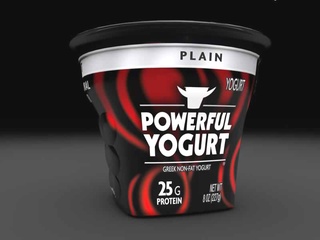 Powerful Yogurt is now in Texas thanks to Central Market. Photo courtesy of Robyn Brooks Folmar

Everyone knows that yogurt is "girl" food. What man in his right mind would mince down the dairy aisle to pick up one of those teensy cartons with all the fruit and flowers all over it?

And yet what a dilemma for those real men harboring a secret desire for a taste of the sweet, fermented, bacteria-injected cow's milk being spooned up by the ladies. Man wants yogurt. But man needs packaging that won't threaten his tenuous masculinity.

Now in Texas, man gets Powerful Yogurt, with its powerful name, masculine package and emphasis on protein. Introduced by a Miami-based company in March 2013, Powerful just landed with a grunt on Central Market shelves.

The package is a black with deep crimson swirls that evoke a tiger, grrrr. (Or maybe a condom wrapper?) The logo includes a bull's head with horns. Strong like bull. The shape of the carton slopes up forcefully, like the finely chiseled torso of a man who has bench-pressed 350 pounds, over and over and over. There is absolutely nothing homoerotic about the package at all.

According to company spokesperson Sarah Goldthwait, who gamely handles all manner of skeptical questions, dairy has up to now been "a no-man's land – but this is bringing guys to the dairy aisle," she says. She claims that Powerful is more manly for three reasons.

"Men need more protein on the whole than women do," she says. "Serving size is the other difference. It's the key thing in making a guy choose yogurt instead of something like beef jerky.

How many sports nutrition professionals, expert trainers and food science PhDs does it take to add protein to a yogurt?

"Yogurt wasn't appealing to men as a snack. So we made an 8-ounce package. Many yogurt companies are going smaller, to a 5.3-ounce package. But we wanted to do the opposite, to give guys a snack that would be filling and satisfying."

Powerful is also pumped with live active cultures "to help with overall health and digestion," Goldthwait says, a polite way of saying that it helps with your poo.

According to the website, the company, founded by dairy industry veteran Carlos Ramirez, reflects the "combined effort of many sports nutrition professionals, expert trainers, food science PhDs, marketing mavericks, the best all-natural food distributor in NY, and a lot of talented and dedicated individuals made the first yogurt specifically for men a reality."

How many sports nutrition professionals, expert trainers and food science PhDs does it take to add protein to a yogurt?

As for the protein needs of a man versus the rest of us puny creatures, those seem to be as overstated as Americans' overall obsession with protein in the first place. According to The Harvard Medical School Family Health Guide, "Despite all the hype about high-protein diets, our protein requirements are really quite modest. ... As a rule of thumb, people of both sexes and any size will do fine with about 60 grams of protein a day."

One carton of Powerful contains 20 to 25 grams.

The sticky part about Powerful's claims is that its manly yogurt isn't actually more proteiny than regular yogurt. An analysis by Men's Fitness found that, "ounce-for-ounce, Powerful Yogurt has around the same amount of protein" as other yogurts. The reason they can get away with saying they have more protein is because of the bigger portion size.

But not to worry: Goldthwait says that they're going to increase the dose. "We're boosting our protein in the coming months," she says. "Our audience is very protein conscious."