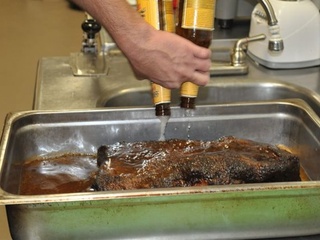 Shiner beer, one of the secret ingredients to Peterson's smoked brisket. Photo by Jessica Dupuy 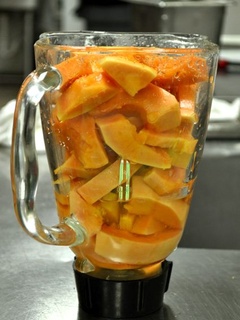 Pureeing guava is the key to Peterson's tropical salsa. Photo by Jessica Dupuy 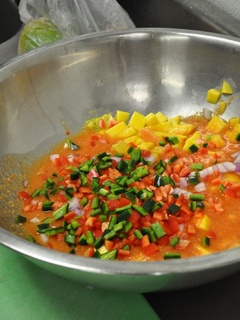 Chef Paul Peterson has made a name for himself as a badass barbecue rockstar with a flare for turning up the heat on ordinary Texas cuisine. With a heralded degree from the Culinary Institute of America and a coveted James Beard Award nomination for Best Chef Southwest, classically-trained chef and former San Antonio local band drummer-turned-Texas chef extraordinaire turned heads with his Little Texas Bistro in Buda in 2002. Later, his foray as executive chef at Café Cenizo at the celebrated West Texas Gage Hotel in Marathon elevated him to celebrity chef status, at least in Texas. Now Peterson has earned a spot at Vivo restaurant with long time friend, Vivo owner, Roger Diaz.

Most Austinites know Vivo for its Tex-Mex-with-a-twist menu, long-stemmed roses for the ladies, refreshing orchid-adorned margaritas and sensual artwork—the north location at one time showcased artwork that was, well, a little more than sensual, prompting 18-and-older signs along the front door. (This was not the kind of place you brought Granny to for her birthday; unless she’s into that sort of thing.) But when a chef with a résumé as lauded as Peterson’s takes the helm, Diaz soon saw the light in letting the sensuality come through the food rather than the pictures on the wall. In the past few months, windows have been added to lighten up the main dining room, and artwork has been revised to reflect… more tasteful sensibilities. (You’ll still find a rather provocative experience in the private dining areas as well as in the private bar area.)

Though Vivo’s menu will remain much the same with favorites such as classic San Antonio-style puffy tacos and the richly flavored tortilla soup, Peterson has been given free reign to rev up the menu with a few Latin-inspired tricks.

“I’ve only slowly tweaked a few things and added a few dishes to the menu. Most of what was already there were treasured recipes from Diaz’s mother,” says Peterson who insisted on spending a few days in her kitchen in San Antonio when he was brought on board to learn her special secrets on salsa and more—a true welcome to the family. “I wasn’t about to mess with her recipes, especially without seeing how she made them.”

But as guests will see on both the permanent and specials menus, Peterson has already begun making a mark in the Vivo kitchen, namely with items such as rich and spicy crab enchiladas, and tender brisket tacos—something I learned how to make first-hand when I stopped by one afternoon to visit Peterson in the kitchen.

Salt, pepper, garlic, a special blend of spices—all in that order—liberally sprinkled on large slabs of USDA choice beef and thrown in a smoker for 10 hours before being boiled in a few bottles of Shiner Bock and finished in an oven for 3 hours. I know Central Texas is King for Texas barbecue, but Peterson’s got a competition-worthy brand on his brisket. He carved up a little corner of it for me as he pulled a fresh one out of the oven. From his knife, to my mouth, with a little blow on the steam in between, I swear it was some of the best brisket I’ve ever tasted. And he hadn’t even assembled it in taco-form yet!

He also showed me steps to make his tangy guava-mango salsa with a few tips to its elegance and bright flavor:

-       Peel and purée a guava; the purée will serve as the binding agent for the other diced ingredients.

-       Use a few different types of peppers for color and flavor such as poblano, red bell, and jalapeño.

-       When choosing jalapeños, if you want less heat, select the ones without white lines; otherwise, your mouth will be on fire.

-       Always use red onion in salsa for more spice and less sugar on over all taste.

-       Never forget the cilantro; “It’s one of my absolute favorite ingredients, and makes everything better,” says Peterson.

-       Only use lime if you need to dial down the heat. The acid will help cancel out the acid of the pepper seeds. Otherwise, leave the citrus on the side.

Peterson has also taken ownership of the wine menu, insisting that margaritas aren’t the only thing to pair with Mexican food. Wine enthusiasts will be happy to see a fair amount of fruit-forward Spanish and Argentine selections, including a beautiful Capafons-Osso “Sirsell” Priorat from Spain that is balanced in fruit, acidity, and tannin. By-the-glass offerings aren’t your run-of-the-mill selection either. “I really tried to select wines that would not only go well with the food, but ones that you wouldn’t normally find at a restaurant,” says Peterson.

In the kitchen, Peterson’s congenial personality paired with his meticulous eye for detail might detract from his often described bad boy character, but his rock-a-billy sideburns, tattooed arms, consistent red and black attire as well as his edgy confidence certainly contribute to the persona. And his former stint as a drummer for a couple of San Antonio rock bands, including ones named Gollum and The Scary Manilows, only adds to the charm. Peterson’s cooking may also add to the rep; it’s not for the faint of heart (read: those who don’t like a little kick in the taste buds), but all this together makes for a winning culinary combination; one that unequivocally persuaded me that being a bad-to-the-bone chef making badass food may not be so bad after all.

Salt and pepper to taste

Toss and serve over slices of grilled panela cheese and toasted bread.

Shiner beer, one of the secret ingredients to Peterson's smoked brisket. Photo by Jessica Dupuy

Pureeing guava is the key to Peterson's tropical salsa. Photo by Jessica Dupuy