Drinking News
What does your beer say about your politics? You won't find it in the bottom of your glass
LATEST NEWS
Luxury condos gallop into Hill Country resort with prices up to $1.3M
Food for thought

How ethical is your coffee? Exploring the local stance on fair and direct trade

How ethical is your coffee? Exploring the local stance on fair and direct trade 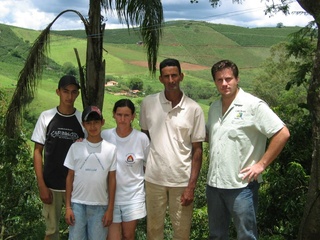 Casa Brazil’s owner Joel Schuler in Brazil with the Severiano family. The boy in the white shirt is Jose Elias, one of six Casa Brazil merit scholarship winners sponsored to go to a private school.

Standing in front of the coffee selection in a grocery store or a cafe is often thrilling (so much choice!), but also perplexing: Which one do I choose? Such indecision is compounded by ethical concerns due to so much coffee being sourced from the developing world.

Fair Trade aims to protect coffee farmers from being exploited but criticisms of it have led to alternative models emerging like Direct Trade. Austin coffee roasters such as Third Coast Coffee, Casa Brasil and Cuvée Coffee source coffees through Fair Trade, Direct Trade or a variation of either. Each roaster aims to offer coffees that taste good and that customers can feel good about drinking, confident in the knowledge that the farmers picking the red cherry that coffee beans come from are benefiting. But true transparency for coffee traded may ultimately lie with consumers themselves.

“Every time you spend money, you’re casting a vote for the kind of world you want,” said Anna Lappé, a writer renowned for her work as a sustainable food advocate.

Fair trade is intended to be a transparent system of business mutually beneficial to consumers and producers. The movement began in 1960s Europe, and today Fairtrade Labelling Organizations International (FLO) is the most widely recognized fair trade certification system.

FLO sets a minimum price per pound of fair trade green coffee beans and mandates additional premiums: a social premium for farmers’ communities and another for farmers if coffee is organic.

But for some, doubts undermine the entire Fair Trade movement.

“I don’t buy into it at all,” said Jon Gehrig, a geography graduate student at The University of Texas at Austin who specializes in the impact of globalization and consumerism on producing regions. He also spent six years as a barista in Oregon. “I’m very skeptical.”

His reservations center on additional costs for certification reducing farmers’ incomes by creating a middleman, and communities being split when some farmers become certified, while others are unable to and miss out on premiums their neighbors gain.

His concerns extend into the future, also, he said, as producers become dependent on wealthier nations’ choices — those embracing Fair Trade — and alter processes to meet that demand. If the market shifts and demand drops, he added, those farmers may be stuck, unable to return to traditional farming practices due to lost skills.

Gehrig said he prefers the Direct Trade movement that he envisages gaining traction and possibly replacing Fair Trade. It’s based on relationships between buyers and producers that vouch for fair trade practices and organic quality through trust and personal knowledge without needing expensive certificates and their imposed methodologies, he said.

Direct Trade is a legitimate trading model but doesn’t provide for the smallest and most vulnerable farmers, said Hillary Rodriguez, head of production at Third Coast Coffee on South Congress Avenue. It invariably benefits bigger farms as it is economically prohibitive for smaller roasters to deal with the smallest farms.

Fair Trade’s advantage comes from its interaction with coffee cooperatives representing multiple small hold farmers, thereby facilitating an economy of scale that makes business with roasters possible. In Ethiopia, which is considered coffee’s birthplace, farms average only two hectares. Cooperatives also have the collective power to improve farmers’ communities by investing in them, as well as assisting with organic certification, which provides further value add to coffees sold, she said.

Although Third Coast sells fair trade certified coffee, such as Ethiopian Yirgacheffe and Sidama, it isn’t fair trade certified as an organization, she said. This is because it believes in paying above the fair trade minimum price in recognition of the coffee’s quality and establishing a relationship with the seller that goes a step further.

Another reason is because some roasters, such as Starbucks, have been allowed to sell fair trade coffee without adhering as strictly to the rules and thereby undermining the entire enterprise, she said.

“Fair Trade is not linked to quality,” said Joel Shuler, owner of Casa Brasil, on the other side of South Congress Ave. — and the ethical coffee debate. “Direct Trade emphasizes that quality is the driver of price.”

Another problem is Fair Trade doesn’t address the socio-economic imbalance, he said, whereby the buyer always occupies a position of strength and the farmer a position of weakness so that premiums amount to bestowing pity. Direct Trade proves to farmers they are respected for producing what is a complex product and rewarded accordingly.

He currently trades with 10 farms, of which the smallest is five hectares. During September he spent 15 days in Brazil visiting some of his farmers and coffee competitions to source new coffees.

Casa Brasil’s coffee is labeled Direct Trade, though Shuler acknowledged that unlike Fair Trade, there is no regulation and any roaster can claim adherence to the practice — customers have to go on his word. But they can visit the company’s website and visit his blog that describes how he has slept at the farms of those he buys coffee from and whom he counts as friends. Casa Brasil’s Facebook page is populated with the faces of those producing its coffee, he added.

“Fair Trade does have an advantage as it sends people on a regular basis to audit farms,” said Mike McKim, owner of Cuvée Coffee, 20 miles west of Austin in Spicewood. But he remains concerned that the perception and reality don’t match up and at best farmers receive about 80 percent of the fair trade price once administrative costs are absorbed. Also, companies can use the label as a crutch to sell mediocre coffees.

But he doesn’t label his product Direct Trade as he feels that over the years the movement has been reduced to a label. “I follow the spirit of Direct Trade as it was originally defined,” he said, referring to when he formerly worked with Direct Trade’s founders, Geoff Watts and Peter Giuliano, around 2005.

McKim spent September visiting coffee farmers in four South American countries. “It’s a massive commitment in terms of time and money, but it’s like if you are dating someone — you can’t just never see them,” he said.

Farmers even come to visit Cuvée Coffee and customers know the lengths the company goes to. Documents aren’t posted online but if someone wants to question the transparency of coffee transactions, McKim said he can provide farmers’ contact details or show relevant business contracts.

Increasingly, roasters are making sense of the complexities of the issues by opting for what they assess are best practices. Third Coast is one of 24 roasters that make up Cooperative Coffees, which handles financial transactions with coffee-selling cooperatives. This could be said to offer a third model blending Fair Trade and Direct Trade in the form of direct trade between respective cooperatives, Rodriguez said.

Cooperative Coffees’ transaction contracts are posted on the Third Coast Website where they serve as the ultimate proof of fairly traded coffee, she said. This method means the burden rests on consumers to check and confirm trade is as fair and direct and transparent as a roaster claims. If you asked Starbucks for its documents, it would laugh in your face.

“It’s more about the principle than the label,” Rodriguez said.

Casa Brazil’s owner Joel Schuler in Brazil with the Severiano family. The boy in the white shirt is Jose Elias, one of six Casa Brazil merit scholarship winners sponsored to go to a private school.