Being Clutch
A day in the life of an NBA mascot: Stealing babies, spilling popcorn, sweating large & making smiles

College Hoops Knowledge
The Big 12 title still runs through Kansas, but don't be surprised if Florida State steals the ACC crown
LATEST NEWS
Here are the top 5 things to do in Austin this 4th of July weekend
Outside the Crease 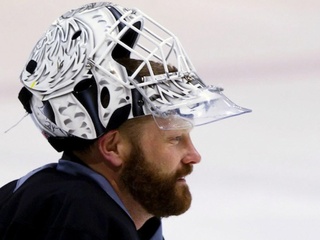 Tim Thomas looks the other way from his White House invitation. Photo via Death + Taxes 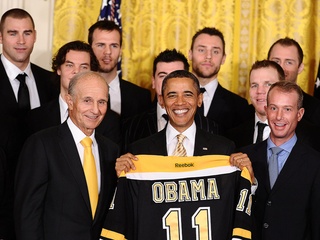 All of the other Bruins attended the presidential ceremony.  Photo by Jewel Samad/AFP/Getty Images

President Barack Obama invited the Boston Bruins to a ceremony at the White House on Monday to celebrate the team's 2011 Stanley Cup championship.

"Together, these players proved that teamwork is everything," Obama said during the ceremony. "It can overcome injuries, it can overcome long odds."

These words were tinged with political rhetoric (read: bipartisanism) and a touch of irony. All of the Bruins players accepted the President's invitation but one: Goalie Tim Thomas, the playoff MVP and one of three Americans on the team's roster.

I believe the Federal government has grown out of control, threatening the Rights, Liberties, and Property of the People.

This is being done at the Executive, Legislative, and Judicial level. This is in direct opposition to the Constitution and the Founding Fathers vision for the Federal government.

Because I believe this, today I exercised my right as a Free Citizen, and did not visit the White House. This was not about politics or party, as in my opinion both parties are responsible for the situation we are in as a country. This was about a choice I had to make as an INDIVIDUAL."

Thomas isn't the first professional athlete to diss the honor of a presidential invitation, and it's unlikely that he will be the last — but, as an outspoken Tea Party "patriot" and a member of the silver medal-winning 2010 U.S. Olympic Hockey Team, Thomas' move certainly comes off as somewhat egotistical and anti-American.

I hope that Thomas felt a little foolish about his decision while the rest of his teammates presented Obama with a personalized jersey.

Tim Thomas looks the other way from his White House invitation. Photo via Death + Taxes

Barton Creek: The Hill Country views that drew this Realtor in decades ago
Westlake Hills: A life-long resident reveals his favorite spots
Point Venture: A Lake Travis oasis where every day feels like vacation