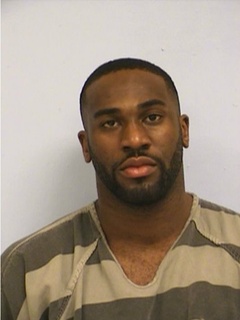 Austin Police charged Okafor, 24, with evading arrest and a city ordinance violation following an incident near Sixth and Trinity streets around 2 am on Monday. Police alledge that when they tried to question Okafor, he ran away. Police are still investigating what led to the disturbance.

Police said Okafor also had a warrant out for his arrest on a Class C misdemeanor charge, but no other information on that case was immediately available.

Okafor played for UT under Coach Mack Brown from 2009 to 2012. Okafor attended high school in Pflugerville, and USA Today named him an All-American player in 2008 when he played for the Pflugerville Panthers.

As of press time, Okafor is in the Travis County Jail.

For updates and to read the full story, head to KVUE.