Fantasy Football Specials
The 11 best bars for your fantasy football draft party
LATEST NEWS
Come Play takes specter of too much screentime to the extreme
Longhorns vs. Ice Buckets 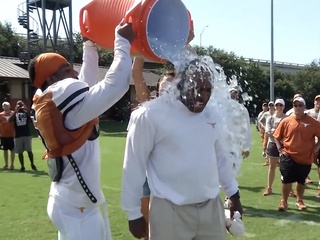 Charlie Strong lightened up the mood after Saturday practices by accepting the Ice Bucket Challenge. Photo courtesy of Texas Longhorns/YouTube

It seems everyone from your grandmother to Justin Timberlake is accepting the ALS Association's Ice Bucket Challenge, so it was only a matter of time before the viral fundraiser made its way to the Forty Acres.

First up was new Texas head football coach Charlie Strong. At the end of practice on Saturday, August 16, Strong undertook the chilly challenge, (although it’s unclear who exactly threw down the gauntlet).

Tasked with the honor of dousing Strong with a Gatorade bucket full of ice water was senior defensive back Quandre Diggs and one of Strong’s daughters. Coach Strong then extended his own challenge to three former Longhorn football players: Vince Young, Ricky Williams and Kasey Studdard.

Studdard, a former offensive lineman who played on the 2005 national championship team, just so happened to be visiting the practice so he quickly followed through on accepting Strong’s challenge. He then threw out challenges to his fellow linemen from the 2005 championship team including Justin Blalock, Tony Hills, Jonathan Scott and Lyle Sendlein.

Not to be left out of the fun, former head coach Mack Brown also posted a video on his personal Facebook page on Monday. The current ESPN analyst then extended his challenge to two of his former players, Quan Cosby and David Thomas.

The Ice Bucket Challenge, which helps to raise funds and awareness for the ALS Association, has been a runaway success over the last week. According to the ALSA, as of August 18, the association has received $15.6 million in donations since Tuesday, July 29. (That’s compared to $1.8 million over the same period last year.)

Donations to the ALSA help to provide care services for people stricken with the neurodegenerative disease across the country, as well with financially backing a global research program focused on treatments and a possible cure for the disease. While we wait with bated breath to see if more Longhorn legends accept the challenge, you can make a donation by going to the official website of the ALS Association.