Is marijuana the secret ingredient for NFL success?

Is marijuana the secret ingredient for NFL success?

Former Dallas Cowboy Sam Hurd has admitted to regularly smoking marijuana with NFL teammates. Niuhuskies.com
Denver and Seattle are the only two teams playing in states where pot is legal. Redheaded Blackbelt 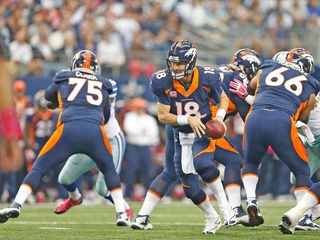 The Denver Broncos are sitting pretty at 8-1 in the Mile High City. Photo courtesy of Dallas Cowboys

The tale of disgraced NFL star Sam Hurd is undeniably tragic. The former Dallas Cowboy and Chicago Bear is paying dearly (if not unfairly) for his transgressions after being sentenced to 15 years in prison for his alleged role in a massive drug trafficking scheme.

But could there be a window to the Cowboys' tortured souls somewhere in this hazy, hypnotic storyline?

Hurd, who played for the Cowboys from 2006 to 2010, claims he regularly smoked marijuana with 20 to 25 teammates in Dallas. During that time frame, the Cowboys made the playoffs three times and had a combined record of 48-32.

Sam Hurd's marijuana-fueled stint in Dallas represents the team's most successful run since the '90s.

Hurd estimates about half of the NFL gets high during the season. The reasons for lighting up mimic the rest of society: diffusing stress, inducing relaxation and dealing with pain. Though illegal in 48 states, pot appears to be a pretty decent predictor of NFL success.

Since Hurd left the Cowboys in 2011, Dallas has yet to make the playoffs or even produce a winning season. In fact, Hurd's marijuana-fueled stint in Dallas represents the team's most successful run since the '90s.

Meanwhile, the Denver Broncos (8-1) and Seattle Seahawks (9-1) are the only teams playing in states where marijuana is legal. They currently have two of the best records in the NFL.

With a five-year prison sentence for possessing one ounce of pot, Florida has the distinction as the nation's toughest state on pot. The Tampa Bay Buccaneers and the Jacksonville Jaguars are both 1-8; the Miami Dolphins are 4-5.

Marijuana doesn't sound like a match made in heaven for athletes. It impairs reaction time. It distorts reality and can cause paranoia. Of course, those effects are widely believed to wear off in a matter of hours. Leaving the user, it would appear, primed and ready to crack skulls and score touchdowns.

Former Dallas Cowboy Sam Hurd has admitted to regularly smoking marijuana with NFL teammates. Niuhuskies.com
Denver and Seattle are the only two teams playing in states where pot is legal. Redheaded Blackbelt