Championship beckons
Sebastian Vettel is the lone star: On pole for the U.S. Grand Prix 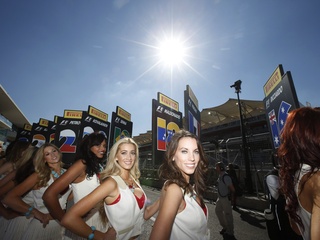 COTA girls Courtesy of Circuit of the Americas

The Formula 1 weekend is nearly over, and the general consensus is that we have a great venue in a wonderful city with enthusiastic and amicable fans. I have yet to hear any negative comments from either team members, or foreign media correspondents.

Racing related events started Thursday with the Motor Sport Business Forum-Texas Symposium. All of the teams and title sponsor representatives that attended stated that they were excited and it was critical for them to have a Grand Prix in the United States.

They emphasized that the most important factor to making sure the United States Grand Prix is sustainable is for there to be engagement with the fans outside of the circuit.

Bobby Epstein co-founder of Circuit of the Americas emphasized that COTA is a business and a venue for which Formula 1 is just one component. He expects that over the course of 2013 COTA will host 1-1.3 million people, for events varying from racing to weddings.

But Formula 1 is a very unique and powerful marketing tool; the global television audience is approximately 527 million viewers in 187 countries. The broadcast coverage from the USGP is estimated to be the equivalent of $200 million in commercial advertising.

There is a whole industry behind Formula 1 that benefits the public in ways that we don’t notice. For example McLaren has taken the Kinetic Energy Recovery System used in Formula 1 cars and made one that can be fitted on trains.

There is a whole industry behind Formula 1 that benefits the public in ways that we don’t notice. For example McLaren has taken the Kinetic Energy Recovery System used in Formula 1 cars and made one that can be fitted on trains, which would allow the trains to accelerate more efficiently. The teams themselves are more or less their own company. The annual budget for the top teams is over $200 million and they employ about 500 people, 100 of which travel to all the Grands Prix.

That event was followed by a premier of 1, the action documentary directed by Paul Crowder and written by Mark Monroe. The room was filled with racing legends, in attendance were: Sir Jackie Stewart, Emerson Fittipaldi, Bernie Ecclestone and Damon Hill among many others. It was a great movie — very interesting to learn about those generations of racers.

It’s easy to forget how different of an era it was back then, deaths at the track, whether drivers or spectators, were common. We’re fortunate to be an era when a driver hasn’t lost his life racing in 16 years. As Jack Brabham put it, “I remember when sex was safe and motor racing was dangerous." 1 can be added alongside Senna as a must-see, must-own movie for any motor-sports enthusiast.

Friday, events got started at the track with an early practice session that turned out to be a little slippery. It has been cooler than the seasonal average in Austin this combined with a new track surface, and a relatively conservative tire selection by Pirelli made things tricky for the drivers. But this has not hampered any of the teams’ spirits, because the weather is expected to warm up and the track will break in over the weekend.

At the Pre Event Press Conference Friday afternoon, it was unanimous amongst the teams that Circuit of the Americas was a state of the art facility, as well as a very interesting, challenging track that the drivers and engineers are enjoying getting to know. It was also unanimous that they were excited to be back in the United States.

When the question about New Jersey came up, it was said that another race in America would only help engage the fans further. Because one of the biggest challenges for Formula 1 is that a lot of the races are in time zones that make it difficult for Americans to watch live, and in this age of instant media coverage, delayed races are difficult to watch when you already know the results.

Overall there was plenty of racing entertainment throughout the day, with just long enough breaks in between the series to walk around and get a view of the next racing series from another turn.

COTA has done a terrific job making this an excellent venue even for general admission ticket holders. The view from the grass hill in Turn 1 was fantastic, as was Turn 19. I can’t wait to see how nice it will be next year after the landscaping matures and the paths are completed. Overall the feedback I received is that people were surprised it is as complete as it is, and as nice as it is. Not to mention the weather has been about as perfect as we could ask.