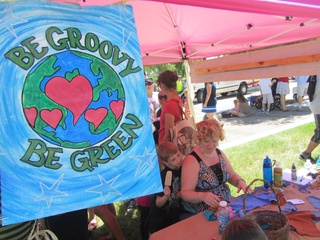 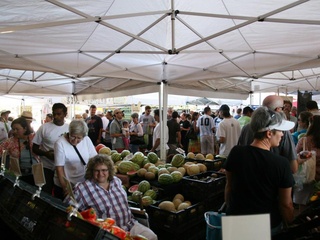 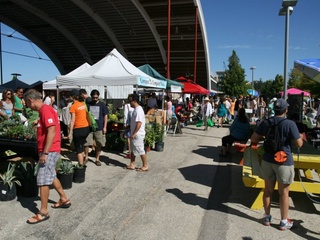 Located just two miles from the University of Texas at Austin and three miles from Downtown Austin, Mueller is a 700-acre urban village in East Austin that has vastly grown in its sustainability, green buildings, community parks and neighborhood diversity since the closing of the Robert Mueller Airport site over twenty years ago.

What was once a rundown void has now become a green, energetic hotspot for the diverse surrounding areas.

The park space near the Browning Hangar in particular has become a central hub for Mueller, serving as a gathering place where people take morning walks, hike the trails, ride bikes and interact with each other. As of last Sunday, Mueller has another exciting addition to add to the growing, sustainable village.

The Mueller Farmers' Market opened on Sept. 9 below the historic Browning Hangar off of Airport Blvd. Over 40 vendors gathered to sell seasonal produce, meats, cheeses, baked goods and specialty foods to a community of people from neighborhoods distributed around the park.

Piecing together a successful farmers market is a job that requires extensive, stressful work, with everything from arranging vendors, preparing the space, obtaining required permits and seeing through numerous other agenda items. For Carla Jenkins, proprietor and Farm 2 Market manager, the Mueller Farmers Market is something that came together both smoothly and quickly. Jenkins and her team organized it in about a month.

All the the hard work Jenkins' team and the Mueller community put into the planning and preparation of the market paid off, Jenkins says. "It was a sight to behold to see all these people coming towards the park. It was like watching people walk into a football stadium."

When the Round Rock Farmers' Market closed earlier this summer, Jenkins began looking for a new location where her vendors could sell. "We've had great markets for years. Austin residents have been going so long to the markets in Downtown Austin and Sunset Valley, so they've already been educated about fresh, local food. Out at Round Rock, we were having to start from the ground floor, and it just didn't find its following."

After the Round Rock location closed, Jenkins inquired with the Sustainable Food Center about her next possible location. The food-centric nonprofit suggested Jenkins speak with the development team behind Mueller, Catellus, since they had coincidentally just started looking for a group to run a successful farmers market.

"I had just started learning what was going on at Mueller a couple years ago, but I hadn't been close to the area. When I told people that we might put a farmers market out there, everybody just kept assuring me it was going to be huge success," Jenkins says.

"[Catellus] wanted a farmers market, and I'm sure they had heard their residents say that was important to them, not just in Mueller but in all the surrounding communities as well. Bringing a farmers market to the area was one of their goals. It fits perfectly in their community."

Dee Desjardin, a representative from Catellus, says that a market is something that has been in the list of goals for Mueller because of the community's commitment to sustainability and neighborhood development.

"As Mueller has grown, so has the demand for this type of activity. The idea of fresh, local produce is just another component of our commitment to sustainability," Desjardin says. "We wanted this area to be a destination for great local food and entrepreneurial business. We've just scratched the surface, and the farmers market builds upon that component that we imagine will only continue to grow and expand."

The Cedar Park Farmers' Market, which Jenkins is in charge of, is already a huge success, and Jenkins believes the Mueller Farmers' Market has the potential to match the success of markets like the Sustainable Food Center's Downtown Market.

One of the vendors at Sunday's market was Pure Luck Farm and Dairy, a goat dairy farm in Dripping Springs that specializes in fresh, unique goat cheeses. "The Mueller Farmers' Market's opening day was the most successful market day I've ever participated in," says Ben Guyton of Pure Luck Farm and Dairy. "The spot is such a beautiful location below the hangar, and it's something that vendors and shoppers alike seem to really get a lot of use out of."

After taking some time to focus on their retail distribution, Pure Luck Farm and Dairy hadn't participated in a farmers market for a while, but recently decided to return so they could sell to the community that has helped grow their business. "Being out there really helps us communicate what our cheeses are all about," Guyton says.

The surge of success the Mueller Farmers' Market has experienced is something that Jenkins wants to continue to build. She plans to include more education components at the market, such as the children's petting zoo that was featured on opening day.

"Living in the city of Austin, so many children have never seen a goat, a lamb, a chicken or a steer," she says. "Sure, it's entertainment value, but it's also educational. We want to continue to educate people throughout Austin about farm-fresh, local food."

Jenkins admits the Mueller Farmers' Market is really only the tip of the iceberg for what she envisions for the city of Austin. She hopes to eventually see a farmers market in every community of Austin — something she knows will take a lot of hard work and commitment in the coming years.

"To me, that's the ultimate goal. Whether it's a huge market or small market, I just want to see people support it."

The new Mueller Farmers' Market is open from 10 a.m. to 2 p.m. each Sunday near the Browning Hangar.