Most Popular Stories
Audience Jerks, taco wins and the most popular stories this week
LATEST NEWS
6 things to know in Austin food: New cocktail bar tips into downtown
A Win Is a Win, Right? 'Horns Will Take It 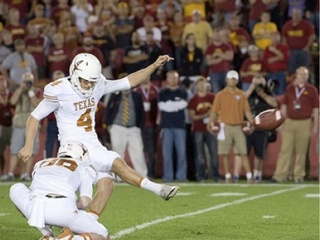 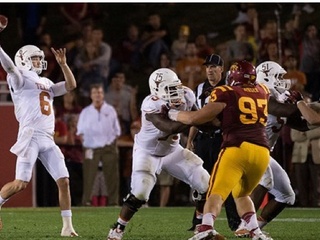 The most intense, nailbiting moment of the Texas Longhorns season so far didn’t happen on the field, but in the review booth. With about a minute to play and trailing Iowa State by 6 in last night’s game, UT running back Johnathan Gray ran into a human Cyclone and was stopped cold at the one-yard line. The ball was torn from him before his knees touched, but the refs ruled he was down by contact. Replays showed the whistle blowing while the ISU player was already hotdogging down the field with the ball.

Let’s be clear: Mack Brown will not coach the Horns next year, but overturning the call that Gray was down would’ve been a devastating loss to the almighty Texas football program on the week James Street died. Another punch to the gut.

Somehow the ruling on the field stood, Case McCoy snuck it over (after another Gray fumble, which the RB got back) and the good people of Ed Ames, Iowa, now know what it feels like to take a tomahawk to the manpackage. Iowa State got hosed. Clear eyes, full hearts, clueless refs, can’t lose. Texas 31, Iowa State 30.

Daje Johnson watched a helluva game. Number 4 is the Horns’ most explosive player, and he saw the ball only slightly more times than Alec Baldwin saw his daughter the day after his “little pig” phone call.

Texas had no business winning “the game they had to win,” as analyst Jesse Palmer — on hiatus from the “Twilight” movie series — kept saying. Case McCoy played like a guy who supports Greg Abbott for governor, missing wide-open guys and hitting defenders on the hands, on several of his 45 (??!!) attempts. But he did prove that prayer works when he heaved a Hail Flutie into the hands of John Harris as time expired at the end of the half.

Offensive coordinator Major Applewhite also won’t be around next year if he keeps calling plays like he did last night. There are air traffic controllers who have more imagination. His schemes could best be called the Saddam Hussein Offense. Are we sure there are weapons?

Texas struck first on the ground, with Gray romping for a 45-yard touchdown. This was going to be easy. But then, on the next series, McCoy threw eight times on nine plays before the Horns’ MVP, punter Anthony Fera, trotted out to show his stuff for the first of many times. Major’s tribute to Greg Davis, now coaching at Iowa, with all those quick passes that lead to quick tackles, fell as flat as James Franco hosting the Oscars. Major Apple-Why?

This is a team whose lack of identity is envied by the Witness Protection Program.

The defense had it moments, none bigger than Jim Jeffcoat’s interception when ISU was on the verge of field goal range to provide some frontier justice. But the linebackers once again looked like they shop for clothes at Wrong Gap.

Tim “Not King” Cole guessed incorrectly more times than Mr. T on Celebrity Jeopardy. And the vaunted “DBU” had its charter revoked after giving up a 97-yard touchdown pass on third and long. Mykkele Thompson played about as well as his parents spell. And when it comes to DBs named Thomas, Duke, Duke, Duke, Duke’s no Earl, Earl, Earl, Earl.

The talk against paying players is that they get an invaluable education. But Mike Davis has been at UT for four years, and he didn’t know TV cameras were going to show his disgraceful cheap shot to take out his opponent’s knees. This is a team whose lack of identity is envied by the Witness Protection Program.

A win is a win, right? We’ll take it. But if a couch is also a couch, UT picked up this one from someone’s front yard. And drove off before realizing it was from a garage sale. Stole the game, plain and simple. Why pay the players when you can slip the zebras a thick envelope? We’re Texas!