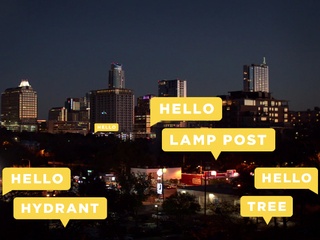 If Austin could talk, what would it say? For the next few months, Hello Lamp Post will give you the chance to find out.

Brought to town as part of the 30th anniversary of Art in Public Places, Hello Lamp Post makes it possible for Austin natives, transplants and visitors to interact with lamp posts, stoplights, mailboxes, bus stops, bollards, parking meters, manhole covers and other elements around the city.

UK-based design firm PAN Studio first launched the project in 2013, and it was so well-received in its first run that the designers earned the inaugural Playable City Award from UK arts and culture enterprise Watershed. “A playable city,” says the website for Hello Lamp Post UK, “is a city where people, hospitality and openness are key, enabling its residents and visitors to reconfigure and rewrite its services, places and stories. It is a place where there is permission to be playful in public.”

With Eeyore’s Birthday, the Superhero Run, naked bike rides, and festivals upon festivals, Austin’s already got plenty of permission for public play. It was only logical for the City of Austin to work with Art Alliance Austin and bring Hello Lamp Post to town.

“It’s a really simple platform,” says Art in Public Places coordinator and Hello Lamp Post project manager Carrie Brown, “but it allows for widespread engagement and a fun way to kind of free-engage the city, to look at the city with a fresh set of eyes. For Austin specifically it’s a great mixture of art and technology, which is something that our program has really been interested in, and this project just does it so brilliantly.”

“We only really notice these things when they’re in the way or broken,” says Asa Hursh, Art Alliance Austin executive director. “The hope is that people will appreciate their urban environment, pay attention to the things they don’t pay attention to.”

It takes barely any effort at all to be a part of it. Let’s say you’re waiting for the bus, and you want to pass the time by chatting with a lamp post nearby. You just fire up your SMS device (flip phones should work, too!), find the maintenance number on the body of the object (lamp post number 0001, let’s say), then fire off a message to the project phone number that looks like this: Hello Lamp Post #0001.

And that’s it! The lamp post will ping you back before you know it, typically with a question to ask you, and the back-and-forth has begun. You’re officially in conversation with your city.

It’s a conversation with the city in more ways than one, in fact. “While it’s called Hello Lamp Post,” Asa Hursh tells CultureMap, “it’s actually Hello Austin. It’s people talking anonymously to one another, sharing our thoughts about our city with one another.”

The project begins one month before SXSW and ends about one month after the festivity stops. The feel of the city will come through strongly from a resident perspective in the first few weeks, followed by a two-week spike in interaction from SXSW visitors and vendors, followed thereafter by a settling down and blending of the two perspectives.

Brown, Hursh & Co. will reveal the project phone number at a launch event in Republic Square Park, from 4-6 pm on February 12. Event attendees will have the chance to say the first few words to our suddenly talkative urban appliances. Check out the project website for more information.