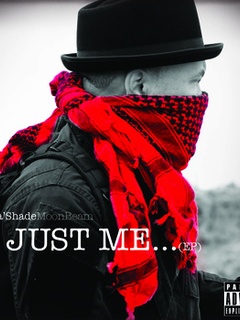 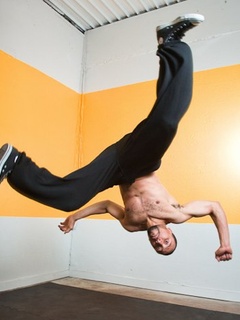 Don't try this at home. Seriosly. Photo by: Peter Tsai 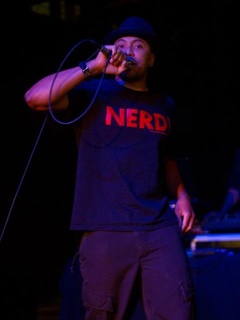 Da'Shade MoonBeam is busier than you are.

When the Austin artist is not working his 40+ hour a week job at the youth development nonprofit LifeWorks, he is practicing for upcoming shows with his martial arts performance team Cry Havoc Action Choreography and promoting his new solo hip hop EP, Just Me..., which just dropped in March.

Of course, these are just three of the venutres he's working on right now until festival season kicks into high gear. That's because MoonBeam is also a skilled cinematographer, a nationally recognized slam poet, an award-winning actor and a tireless advocate against human trafficking.

Oh, and there's one more thing that influences all of the other amazing work that he does: Da'Shade MoonBeam is also a big ol' nerd. And proud of it. One look at the "Picard vs. Kirk" T-shirt he's sporting on this day confirms that fact for me.

To be more specific, MoonBeam classifies himself as a "street-nerd," pointing out that his appreciation for video games, science fiction and fantasy arrived while he was growing up in the pre-gentrified East Austin of the 80s, where drugs and gangs were a real part of his everyday environment.

"I used to get beat up all the time because I was different from everyone around me. I just got tired of it, so I decided I had to do something," he says. Motivated by a grandfather who served time in the military during WWII, MoonBeam took up martial arts "like the Ninja Turtles" to start protecting himself and his younger sisters from the very real threats of his environment.

In his song "The Most Magnificent" (playing in the video above), MoonBeam speaks to his upbringing:

"See, I'm an oddity/A street-nerd/I study the street/A geek from the concrete/When there was nothing to eat/Now I munch rappers for lunch... I'm a misfit, a heretic/Never fit in the box/Like the gutter on the curb/I've been embraced by the block."

Rather than succumb to the constant pressure created from his adversities, MoonBeam channeled his need for self-expression first into martial arts and then into writing, art and fight choreography.

Pretty soon, MoonBeam was recruiting like-minded friends to join him in these ventures, which eventually led to the formation of the socially-conscious hip hop group Blacklisted Individuals and the Cry Havoc Action Choreography team.

"[My friends and I] would stage these epic battles that looked like we were beating the hell out of one another, but it was all planned out and nobody was getting hurt," he says. "The kids in my neighborhood loved it and they would come to watch in the park every weekend."

When I initially use the word "dance" to inquire about what Cry Havoc does at shows, MoonBeam is quick to point out the difference between dance and fight choreography: "I have seen a lot of beautiful, intricate dancing and it is hard and tiring, but it's not dangerous as far as I know. What we're doing, even with dulled edges on our blades, is. If we move wrong or turn in the wrong direction, we could get pretty messed up."

Dropping plenty of Japanese terms to verify the authenticity of both his martial arts and nerd training, it's abundantly clear how his appreciation of Jackie Chan movies has influenced his development as an artists as much as, say, Star Wars and Star Trek. (As if the light sabre routine in the video above didn't cement that for you.)

Recognizing the plethora of talents MoonBeam possesses, RAW Artists Austin has selected him to participate in their next two multi-genre arts celebrations at The Parish. These monthly multi-city parties are an excellent fusion of static and performance art and music hosted by a local coordinator (in Austin's case: Meghan Jones).

With such an eclectic approach to arts engagement, RAW Artists is the perfect match to Moonbeam's array of diverse talents. "It's an amazing thing Meghan and her team have put together," says MoonBeam. "I love these nights, getting to see how other people approach their work. I'm grateful to be a part of it. And it will give me the chance to perform with RAW in other cities."

Even with his attention divided between his music, his choreography, his acting, his writing, his filmmaking and his full-time job, the street-nerd has his eye on the future and how to always keep building upward.

"It's tiring, man. And if someone came along and handed me a record deal and a contract, I can't say I wouldn't take it in a hertbeat," he laughs. "But until then, I gotta keep moving forward."

You can download Da'Shade MoonBeam's EP Just Me... from his website or pick up a personal recording of it from him at the Sept. 20 RAW Artists show at 8 p.m. at The Parish.

Don't try this at home. Seriosly. Photo by: Peter Tsai

Barton Creek: The Hill Country views that drew this Realtor in decades ago
Lake Austin: Where one real estate pro is always at home
Long Canyon: Peaceful country vibes can be found just north of Austin