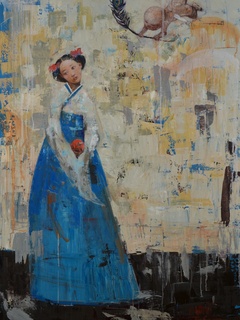 East and West, classic and modern, familiar and abstract—the liminal spaces in between are where Yang finds the inspiration for her complex, emotional paintings that are finding homes in the collections of galleries in New York, New Mexico, California, Florida and Georgia, and with collectors like actress Halle Berry.

As the only gallery in Texas to feature Yang’s work in 2011, The Russell Collection Fine Art Gallery welcomed the humble artist to their gallery Saturday for an exhibition that is sure to get Texans talking. Prior to the show, Yang was even visiting with Texas winemaker, Lewis Dickson, who includes Yang's artwork on several of his La Cruz de Comal bottle labels.

Gracious and serene, Yang was kind enough to provide us with a walking tour of the exciting exhibition of her new work. She opened up about her evolution as an artist and the importance of remaining receptive to life’s possibilities.

Believe it or not, before she was an international jetsetting artist on the rise, Yang was a quiet librarian working in Japan. As a third generation Korean woman raised in Osaka, Yang learned how to live around the duality of a home life and a school life that did not always agree.

Discouraged by her parents to pursue her love of drawing, Yang pursued a liberal arts education instead. After receiving her graduate degree, Yang worked at the Japan Foundation for many years as a librarian. “I was alone a lot at the office, and I didn’t want that for myself,” recalls Yang. “So one day, I just quit. I thought, maybe I should give myself a break.”

Yang decided to make her career change official and gave herself two years to experience life as a full-fledged artist. She moved to the United States, rented studio space in Santa Monica, California, and started painting.

“I got [to the U.S.] and I was so scared,” she admits. “I had so much freedom and I didn’t know what to do with it. I was so honest and vulnerable. But that’s when I decided I had to just jump in.”

Accepting the challenge, Yang began with the hardest and least rule-bound art form she could conceive: abstract painting. While scaling the peaks of this personal Everest, Yang discovered a personal connection to this form of painting.

“In Asian paintings, everything is about energy,” explains Yang. “Abstract expressionism was influenced by Chinese and Japanese painting, Sumi-e drawings, where everything is contained in one brushstroke. I was brought up that way; I knew about it. And somehow, in the process of learning in my head, I forgot. Now I see the importance of it all. Slowly through the painting process, I’m learning it again.”

Once she overcame her intimidation of abstract painting, Yang began infusing her paintings with masterfully detailed figures as well. Yang had studied figure drawing for years, so these images were a comfortable return to familiar methods. "I feel more settled with the figures," she says. "And this is what I think I'm more known for, these figures."

Most of the images she uses are old photographs she finds, but occasionally the images are borrowed from other painters like Caravaggio and Botticelli. Looking around the exhibit at the Russell Collection, you’ll find Yang’s interpretation of the Great Masters hanging next to distinctly Eastern images of women in traditional Japanese and Korean costume.

To the artist’s credit, the effect is never disorienting, as all of the paintings share a similar unifying abstract treatment. “I want to feel what the other artists felt when they were painting their version, but I do it my way,” says Yang. “However I’m feeling when I see the original image is what I want to include in my paintings.”

One historical figure Yang vividly recalls painting is Minnie Vautrin, an American missionary and schoolteacher that spent her life defending thousands of Chinese women during Japanese invasion during the 1930s. “I remember an extreme sadness coming over me from her photograph,” she says. “And as I worked on this painting, I could not help but be overwhelmed by that sadness. You can see that energy in the painting.”

The deliberate foreground abstractions act as a deconstructed veil over the precisely drawn female figures in each of Yang’s paintings, establishing an exciting conflict that keeps the eye constantly engaged. The haunted, often unfinished women in Yang’s paintings appear trapped in the background, waiting for something more to happen.

“Art really helped my life,” says Yang while looking at one of her most recent works. “I didn’t want to call myself an artist. I’m just a painter. But while I’m painting, I feel comfortable. And it took a long time to find that.”

Yang, the wise philosopher-artist, is correct in asserting that painting can express the things we mean when words fail. Whether you know about the artist’s journey of self-discovery or not, it’s difficult not to be emotionally moved by the figures looking out from her canvases, women caught in the spaces between worlds.

Take time with these paintings and admire the layering and precision required to capture the intensity of the subject's focus or the vibrancy of the palette. Yang is making bold declarations, in the manner in which she is uniquely qualified. No longer a lonely librarian, Yang is now a painter with a clear, deliberate voice.

Rimi Yang’s work will be on display and available for acquisition at Russell Collection Fine Art Gallery until Dec 24.