The most expensive cows ever: CowParade does good for kids, with a little help from Leno

The most expensive cows ever: CowParade does good for kids, with a little help from Leno 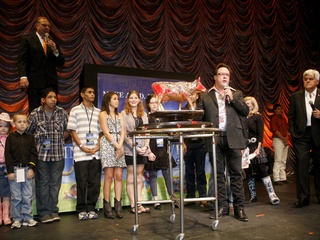 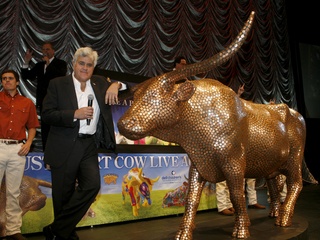 A million bucks is a lot of money, especially for cows. But it makes an even bigger difference when that million bucks gets used to help local kids struggling with debilitating diseases and their families.

It was Verret who made sure the CowParade — responsible for those crazy fiberglass cows decorated by local artists you probably saw all over town — delivered on its promise to raise money for the charity. It was also Verret who had the temerity to suggest he could raise a million dollars selling those cows.

As it turned out, he raised more; enough to pay for the Nov. 13th event at ACL Live's Moody Theater and still have a million left to donate. The 40 cows sold that night were auctioned to the highest bidder at an average price of over $33,000. Two cows sold for $150,000 on the hoof. It was the largest CowParade auction ever held worldwide, and in the top five for money raised during one event in Austin. It didn't hurt that Jay Leno of NBC's Tonight Show, flew into town to host it.

"Most importantly, we raised a huge sum of money to support families whose children are fighting cancer and blood diseases," said Verret.

The first thing paid for out of that million was a wig and prosthetic leg for a 13-year old cancer patient whose family couldn't afford one. "That is why we did it," said Verret.

"We cannot thank you enough, we are speechless. Our goal is to help every child and family that comes to us, this is more than a great start in doing that," said Samia Joseph, who founded Superhero Kids just two years ago. The endowment helps cover quality of life expenses for kids with cancer and blood disorders and their families.

CowParade began in Switzerland in 1998 and has visited over 70 cities in 30 countries around the world covering every continent. Europe has hosted over 30 parades in total. The cows in many cases have become major works of art and sought out by collectors. Even Oprah bought a couple in Chicago, but no CowParade event has ever approached what Milton Verret and the Austin community accomplished.

CultureMap is celebrating a Culture of Giving this holiday season. You can also help the Superhero kids fund by going to their website and donating.