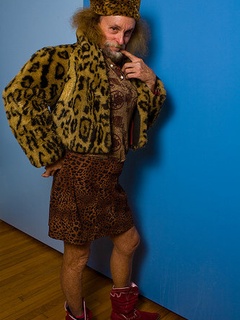 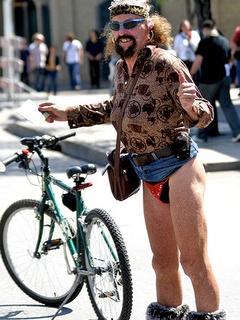 If God has a sense of humor he's trying on Leslie's boa right now. Yes, heaven is a little bit weirder today and Austin is a little less.

At 1 a.m. Thursday morning, Albert Leslie Cochran passed on to whatever lies after, he was 60 years old. He had struggled to make it this far after being found unconscious last month and suffering through his fourth brain surgery in less than three years. He moved to hospice care just a few days ago.

Leslie's friend Debbie Russell alerted the media with "Leslie makes it to 'Leslie Day'" and Facebook lit up with condolences and remembrances. There are two places fans can go to express themselves, the "Love for Leslie" Facebook page and website. "People are encouraged to share their Leslie stories here," said Russell. "Also here are auctions of beautiful portraits of Leslie for raising funds. Posters of these portraits are being printed and will be sold in local area stores. All proceeds will benefit expenses related to supporting Leslie."

The stories of Leslie generally start like this — "I was walking/driving downtown and saw this great ass in a thong walking down the street. I thought, 'damn theres a girl with a great ass and a LOT of confidence to wear that downtown.'" Of course once you got around to the front of Leslie, you realized you'd been duped again. But there he was smiling, waving, and talking to anyone who came within shouting distance.

Leslie lived in Austin permanently for only 15 years, but in that time he became an icon; the "king of weird" and arguably the starting point for the "Keeping it weird" slogan (now trademarked). He ran for mayor three times, even appearing with his boa and tiara at mayoral debates (thankfully he wore pants). If you knew Leslie, you also knew he was serious about running for Mayor. He spoke about real issues and really wanted to make a difference. He didn't win of course, he came in second, garnering almost 8 percent of the vote in 2000.

He was mentioned in the New York Times, the Wall Street Journal, had a set of collectible refrigerator magnets (you could change his clothes, including multi-colored boas), and an iPhone app. He made money from all of those things and still he was homeless, sleeping out in the street far more than anywhere else even to the end.

Whether Leslie helped the cause of curing homelessness or hurt it can be debated another time. Did he bring attention to the plight of the homeless or did he make it easier for us to ignore them as kooky and entertaining folk who made a choice? It doesn't matter right now.

If you met Leslie — and so many did given his gregarious nature — you knew he was genuine, kind, and cared a lot about our city. He had an amazing wardrobe of very small women's clothing which he wore well, and he looked great in heels.

Leslie Cochran made our city a better place by being here. Godspeed Leslie, you lived life by your own rules, we should all be so lucky.

There will be two public memorials held in Leslie's honor, the first on Thursday night — a gathering at City Hall plaza followed by a march down to 6th St. at 6 p.m. The other, a memorial service will held at 2 p.m. Sunday, March 11th at the Homeless Memorial Tree & Plaque at Auditorium Shores. People can begin placing memorial items there now.

Here's how to get a prescription for medical cannabis in Texas
Celebrate 4/20 with the state's first Texas-owned medical marijuana dispensary
Texas is expanding access to medical marijuana. Do you qualify?

Leander: Space to spread out and its own vibrant downtown
Westlake Hills: A life-long resident reveals his favorite spots
Downtown Austin: Where the city's movers and shakers put down roots