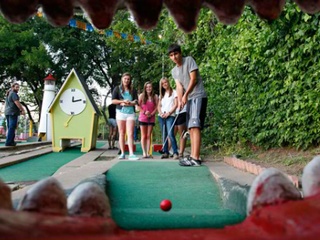 Hometown traditions are everywhere in the ATX. We make room for the big boxes and corporate giants when we have to, but stay true to our roots when we can.  It’s thanks to that loyalty that I can now spend a weekend guiding my 5-year old down my very own Memory Lane, hopping from one amusement to another and watching him enjoy, firsthand, the same rickety park rides and old-school roller rinks I loved when I was a kid.

Whether you’re a native Austinite or just raising one, here are five places straight from Austin’s past that the whole family can enjoy. Consider this your Retro Austin tour, family style.

If you live in this city and don’t make it a point to get the kids to Zilker at least a few times a year, you’re doing Austin all wrong.

Deep in the wilds of North Austin lies this hidden piece of Austin’s past, keeping the 10-and-under set amused and enthused since 1979.

Pony rides and putt-putt flank a gauntlet of tyke-sized rides from airplanes to old-timey race cars, with a wobbly train running the perimeter of the park at regular intervals.

Yes, age and rust have taken their toll on the place, creating a decidedly creepy vibe that even Hollywood has recognized (the park was used as a set for a 2006 horror film starring Sarah Michelle Gellar which, for Buffy fans like me, is more of a plus than a minus) — but that ramshackle, "Something Wicked" vibe is precisely what makes Kiddie Acres feel so uniquely Austin.

Besides, little kids go absolutely berserk for the place and with reasonable ticket fees and concessions, it’s totally worth the price.

If you’ve ever driven through the intersection of Lamar and Barton Springs Road, you’ve felt him staring at you from his elevated position on the southeast corner. The giant statue of the boy from Neverland has been creeping out passersby since the 1950s or so.

So, okay, it actually looks nothing like Peter Pan. (Truth be told, it more clearly resembles my weird older cousin Ben, but with a more pronounced overbite.) But somehow that discrepancy just adds to its charm.

I remember attending birthday parties and play dates here when I was growing up, and its appeal to a younger crowd still holds steady.

With two diversely decorated courses boasting bizarre but oddly artful obstacles (like an unnervingly sinister bunny and oversized recreations of dead animal skulls), this laid-back, super affordable Austin landmark is a great place to spend a fun, quirky afternoon with the fam.

Be prepared to pay in cash (your credit’s no good here, pardner) and make your stop early (there’s little shade to protect from the afternoon heat, and in later hours the park’s BYOB policy attracts an older, much rowdier crowd); if you plan ahead for the trip it’ll be more enjoyable for everyone.

I remember tagging along with my mom for League Night at Dart Bowl in the (ahem) 1980s. Back then, it was a smoke-filled, beer brawlin’ kind of place — no laser maze or bumper lanes to keep little ones from getting frustrated and calling it quits. (I also walked to school in the snow, uphill, both ways.)

Now, the smoke has cleared and, while the beer still flows freely and the old-school “dive” vibe remains, there’s decidedly more of a family feel. Dollar Mondays can get kind of wild, but $1 games, shoes, nachos, dogs and sodas might be worth a little rowdy. Great place for birthday parties or a last-minute afternoon stop to bowl a few rounds before dinner. Better, yet, partake of the alley’s famous enchiladas and knock down two pins with one ball.

Just a few notes of pretty much any 1980s song can drop me right back into the days of backwards skate, suicides and Pac Man Fever. As it turns out, roller skating’s just as much fun pushing 40 as it was when my biggest concerns were zipping into my Gloria Vanderbilt jeans and perfecting my crossover turns.

Open for more than 20 years now, Playland is an old-school rink with few frills — a sprinkling of arcade games, vending machine concessions (sadly, no nachos or Frito pie) and a playscape for little non-skaters are about it, as far as amenities go. Moreover, the place gets ridiculously crowded on weekends (a weekday skate is by far the better choice), and you’ll have to skate along with littler kids to make sure they don’t get trampled.

But, still, with its retro lighting, center-of-rink games like Limbo and the Hokey Pokey, and “walkers” to help little ones get rolling, Playland can be a great place for the whole family to glide.

Sure, there are other parks in the city — other playscapes, other trains, other shady spots for picnics. But there’s only one Zilker.

For many families, the park’s annual Kite Festival and Moontower Christmas Tree are Austin rites of passage, but the park’s also home to an overabundance of activities year-round. With easy access to Barton Springs Pool, the Botanical Garden, Zilker Hillside Theatre and more, it’s entirely possible to climb, play, picnic, ride, canoe, swim, explore and learn, all in just one day at Zilker.

Hop on the Zephyr and find yourself enjoying the 25-minute scenic ride just as much as your Thomas-fan toddler; soak in some sculpture and get cultured at the Umlauf Sculpture Garden & Museum; or visit the Austin Nature & Science Center for some serious, hands-on schoolin’.

Zilker’s been helping families enjoy the great outdoors since the 1930s, and for generations of locals it’s become the backdrop to many a cherished memory. Of course it has its drawbacks (on especially busy days, parking can be an issue and on festival weekends like ACL don’t even bother), but if you live in this city and don’t make it a point to get the kids to Zilker at least a few times a year, you’re doing Austin all wrong.

Law, tech, and a sense of humanity put one Austin Realtor on path to success
Austin Realtor shares why charming Tarrytown drew her back after childhood
Swanky Austin condo boasts incredible downtown views from every room