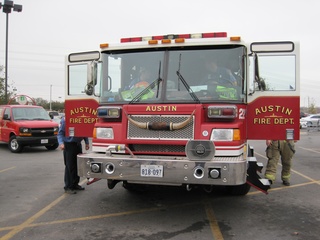 An Austin firefighter has been suspended indefinitely from the department after being charged with driving while intoxicated.

Police say on May 10, Travis County deputies responded to reports of a disabled vehicle blocking traffic in the 1700 block of Grand Avenue Parkway. According to an Austin Fire Department memo, deputies say the car hit a guardrail and curb.

Deputies say the driver was AFD firefighter Mark Christopher Madison, 53. The memo says deputies smelled alcohol on Madison's breath, and he was stumbling and slurring his words. Madison refused field sobriety tests, but in an interview, he said he drank between 10 and 12 cocktails at the Down in Texas Saloon in an eight-hour period. During the interview, when asked if he was intoxicated, Madison responded, "I probably was," the memo says.

The AFD Code of Conduct states that firefighters should "conduct themselves in a manner that will bring credit to themselves and the Fire Department" and "obey all laws of the United States, the State of Texas, and the ordinances of the City of Austin." According to the memo, Madison violated both of these rules.

His suspension went into effect on July 10.

The Texas Tribune lists Madison as the highest-paid Austin Fire Department firefighter with a salary of $121,330 as of June 2013. According to the Tribune, Madison has been with the department since April 1985.

To read more, head to KVUE.com.