Major Parenting Issue
Parents in the workplace: Why is taking time off for kids frowned at?

Emotional Hardbody Answers: What to do when you can hear your neighbors?

What to do when you can hear your neighbors' every word? 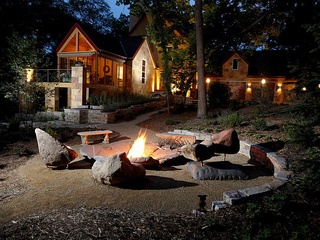 We have new next-door neighbors. Unlike our last neighbors, the new neighbors spend a lot of time in their backyard. They especially log in a lot of time sitting around the table on their back patio in the evenings. Sometimes there’s a group of people, but usually it’s just the husband and wife.

One time, shortly after they moved in, my husband and I were turning in for the evening when we discovered that we can hear every word of their patio conversations from our bed! This is with all the windows in our house closed and the air conditioning (or heat) on. It’s not like we’re trying to listen in — in fact, it’s quite the opposite. We are trying not to listen so we can go to sleep. But there seems to be some strange phenomenon with how the sound bounces from their back patio up to our second story master bedroom.

This really concerns me because I feel like I’m eavesdropping. I feel certain they have no idea that we can hear them. If I’m sitting on the back patio in a decent-sized backyard at 11:30 pm having a conversation with someone at a normal volume, I would not expect that the people next door would be able to overhear us from inside their house.

Despite being able to hear these conversations, I don’t really know these people very well. I’m afraid that if I tell them that we can hear every word they say it will create awkward feelings between us because they’ll think I’m really complaining about the noise by pretending to have concern for their privacy. On the other hand, I’m afraid if I don’t tell them I could end up overhearing something I shouldn’t, and that will also create awkward feelings.

What should I do?

Party on the Patio

Hold on a second — I promise I’m going to answer your question as soon as I finish answering the one from the folks who can can hear from their back patio every noise their neighbors make in their master bedroom.

1. Treat others the way you’d want to be treated if the roles were reversed.

2. Assume people are reasonable unless they prove otherwise.

If I were your neighbor, I’d want you to tell me — sooner rather than later. And now you have the perfect conversation opener. You can just forward this column to your neighbors and preface it with something like, “Can we talk — but preferably not on your patio?”  To soften the news, I would suggest bringing a housewarming gift to this meeting: matching white noise machines — one for your bedroom and one for their patio. After all, they probably have something to tell you, too, because sound waves don’t just travel in one direction.

True, the conversation may be awkward for everyone concerned, but that shouldn’t stop you from telling them. Sometimes grownups have to do things that make them feel awkward or uncomfortable. Colon and prostate cancer screenings are but (pun!) two examples. If your neighbors are reasonable people, they won’t hold it against you. If they do, it doesn’t make you wrong for telling them. It makes them wrong for being unreasonable.